I finished my last art card for the 30 in 30 project. Yay! Here are some of my favorites that I haven't posted yet: 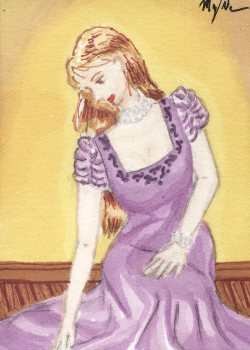 This one is based on a photograph that

verminius_rex took of me at ConQuesT a few years back, I think. Not that it actually looks anything like me, of course. I'm pretty happy with the way the dress came out, though. 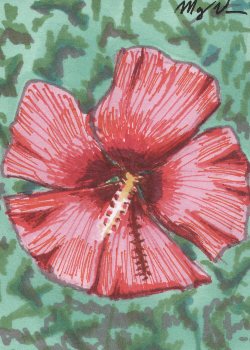 This one is based on one of the photos I took at Powell Gardens several years ago, when I went there with Lut and my parents. 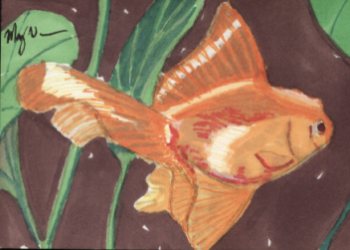 This is roughly the point where it occured to me to look for public-domain-image sites for references, instead of searching on "public domain portrait" images and hoping that the items returned were actually in the public domain. Not that this is really a huge worry since it's not like my pictures tended to look very much like subjects anyway. I like the composition on this picture, though; I think the sparse leaves in the background work pretty nicely. Entirely by chance, since I was just putting in elements from the original photo. 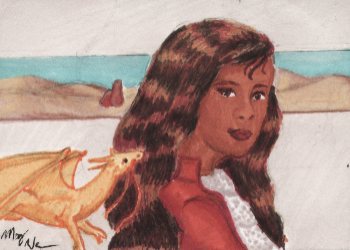 For this one, I didn't use any image references. Instead, I dug up everything anyone's ever told me about composition and actually tried to compose the picture, instead of "This subject looks interesting, I'll draw it" followed by "I need to put something in the background. What would be there?" 9.9 The main rules I was trying to follow here were some advice from

tuftears ('Whatever the figures are looking at, make sure there's something to redirect the eye from that back to your picture and not off the page' 'You can put in a slice of background instead of filling up the whole background'), some from

cerulean ('use different values for the colors in the foreground vs the background') and the rule of thirds, which

alinsa told me about (divide the picture with two horizontal and two vertical lines at equal distances, and try to put interesting things at some of the intersection points). Anyway, I was pretty happy with the way it worked. I didn't realize until I scanned it how crooked the landscape-window is, though. Ooops.

There were some more that I liked, but I'll link to those later.

Reporting on the US federal gov't's deficit always talks about the raw numbers: ($1.35 trillion!) Sometimes it mentions percentage of GDP (9.2%!)

It hardly ever talks about government income.

I get the feeling that government income generally goes up and down in a way that has very little to do with raising or lowering taxes, and a great deal to do with whether or not the economy is booming. But I don't really know, because 'how much money does the government receive?' isn't a question reporters are interested in answering. v.v Maybe I'll dig through the CBO's website and see if they can tell me.

One of these decades, I'm gonna hold a job for more than a year or two.

Not that I really miss the muse factory, mind, and I'm sure glad to be out of the Emotional Tour Guide biz. But it'd be nice to have a bit of stability for a few years, yanno?

'Course, the Hole is pretty much the antithesis of 'stable'. Still, the work's kinda cool once you finally get out of training. I've been an actual Hole Monitor for a couple months now, and (don't tell the boss) I like it.

It's nowhere near as dangerous a job here in Kansas as it is, say, in Ukraine or Lhasa. Sealwarn-Cardinal has the Hole locked down pretty tight here; those Fey Signs have been doing a bang-up job keeping it pinned at Bunker 8. It hasn't changed relative position by more than a foot since the last octogram went down in '03. We're not like those poor bastards trying to track it across the landscape and issuing Hole warnings to evacuate the area.

Here at Bunker 8, we mostly do exploration, charting what passes for the interior of the Hole. The exterior of the Hole has already been well-documented. It's eleven feet tall, roughly cylindrical but tapering slightly at the bottom and widening slightly at the top, from about 5 feet wide at the top to 4.5 feet wide at the bottom.

You can't see it, or at least you can't see it now that we've excavated it fully. You used to be able to tell where it was by what wasn't there -- that big ol' hole in the ground. We've got tape all around it, in addition to the octograms and of course the big glass observation bubble that only qualified Hole Monitors are supposed to enter. Even we don't go into the Hole, most of the time. We send remotes in to take measurements and look around, and let me tell you, it is something else. We've dropped a remote almost two miles down inside that ten-foot-tall sucker, and the weather is --

-- Aaaand so much for lunch, alarm's going off, sounds like a live one in there. I'll finish this later.
Collapse