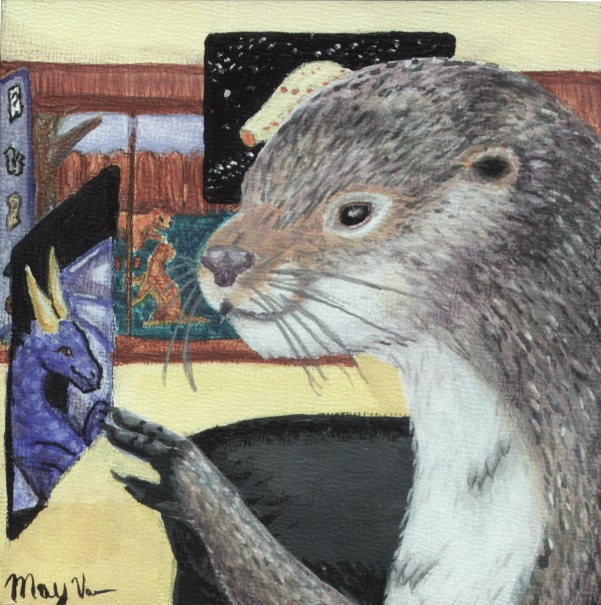 The dominant figure is supposed to be Era, the main protagonist from

terrycloth's latest story, Familiar. She looks more-or-less like an otter with the coloration of a grey squirrel.

Having burned out for no explicable reason on MMOs and even puzzle games, I've been poking at board games lately. Since playing board games in person is so difficult, involving traveling vast distances or -- even worse! -- finding local people who play (eeee! scary!), I've been doing most of this online. My favorite so far has been Race for the Galaxy on the Genie server. This is a clunky web-based implementation sufficiently primitive that it runs on my netbook. There's a much more elegant and faster single-player version, which I am afraid to try for fear I will like it better; one of the things I like about board games is that they are semi-social activities, even when played online.

Then there's the Asobrain site, which has !Carcassonne (called "Toulouse") and !Settlers of Catan (called "Xplorers"). It has a pretty nice implementation, but I don't really like playing on their site.

One of the board games I like but haven't played much is Agricola. I only know three other people who like Agricola, and only two of them live in the same city as each other. This weekend, I came to the conclusion that if I want to play this game more than a dozen times in my life, I'm gonna need to do it online. So I asked Google if there's an online implementation of it.

I played through a single player game. (This requires no AI; Agricola actually has a solitaire version as part of the official rules). The site, is, umm. Functional. It makes the Genie code look sophisticated. You are very much on the honor system with it. The engine will calculate some things for you, but since it doesn't take into account card modifiers, it'll believe you if you tell it differently. Which, on the one hand, means that it's easy for you to screw up, or to cheat unintentionally. ("How many sheep can an unfenced stable hold?") On the other, it also means it'll let you change your mind about moves after you've made them, or rearrange stuff you already put down. Which, technically, you shouldn't be able to do, but it's the kind of thing people do all the time when playing games in person, especially games they've just learned. And I do find it a bit annoying the way computer implementations seldom have an "undo" function. So the Banach site is a lot like playing in person in that respect. It's also sufficiently primitive that it runs on my netbook, and -- bonus! -- it has a save function, so if you don't have time to finish a game in one sitting you can save and re-load it later.

Soooo ... if anyone wants to play a game some time, let me know. O:) The Banach site actually has copies of the rules scanned in, so you can theoretically learn to play it there even if you haven't before. I'd recommend a solitaire game on the site regardless, just so you can familiarize yourself with the interface without worrying about keeping other players waiting.
Collapse