This is my second custom My Little Pony(tm). He's inspired by Limit from

terrycloth's online serials, "Space Otter" and "Familiar". In hte novel, Limit is a space otter: a genetically-engineered human adapted for space, not a pony. He has midnight-blue fur with white dots like stars, however, which I thought would make a pretty cute pony.

This pony took a lot more time than I expected -- I thought "he's mostly blue with white dots, how hard can it be?" Hahahahahaha! It took about six coats of cobalt blue and then another couple of washes of Payne's grey before I was happy with the blue (that was one weekend), and then I had to find some references for star fields to get the stars right (that was the next weekend). I made the cutie marks overly complicated because I foolishly thought the rest of the figure would be simple. The cutie marks didn't take that long to paint (all right, about two hours, but I'm slow) but it took me most of the weekend to get up the energy to get started.

All in all, I'm pretty happy with how he's turned out, but I can't quite decide what to do with his mane. I had originally planned to dye it in shades of blue, but I rather like the contrast of the white. At least when viewed from his left. From his right side, it's kind of overwhelming. I'm thinking of leaving it white but haven't decided. Opinions? 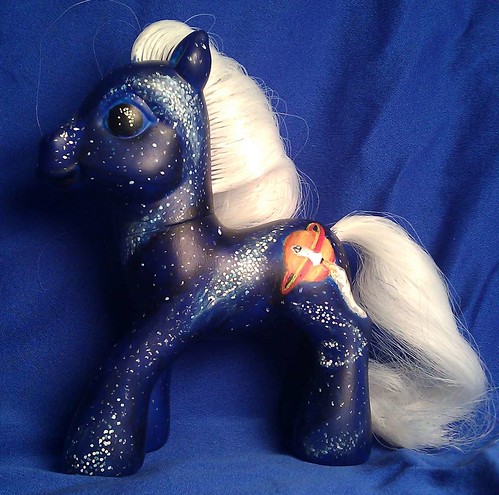 Open to: All, detailed results viewable to: All. Participants: 10

What color should I make his mane and tail?