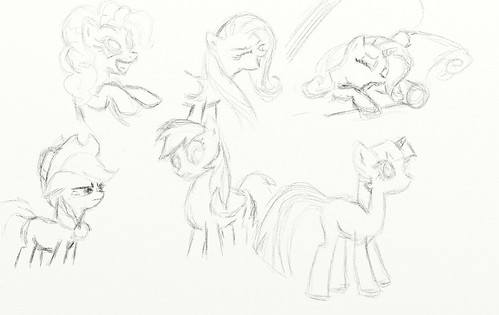 Maybe I should blame

terrycloth, because he's the one who got me started watching the show, but no. I blame

the_gneech for this one. I watched the Gneech Livestreaming the creation of his last ponypic, and watching someone else draw a pony made me realize what freakish little creatures these guys are. Their proportions are bizarre: their eyes take up about a third of the space on their faces, their foreheads are gigantic, they have these teeny button muzzles that are maybe half the size of one eye, and their bodies are only slighlty larger than their heads. No, really, if you take a typical image from the show, the distance from base of neck to top of head is almost as long as the distance from base of neck to bottom of foot. And yet, somehow, they're adorable anyway.

Since it's an animated kid's show, the characters are colored very simply as well as highly stylized, and it made me wonder how hard they are to draw. Finally, I decided to go ahead and try it.

Answer: DAMN HARD. I spent over two hours sketching them by staring at screenshot references and freehanding copies -- all of these sketches are copies of poses from the show. Copying an image, or working from life, is much easier for me than trying to draw from my head. But even with a reference right there, I struggled trying to make the copy look like the original. My sketch of Rainbow Dash looks like Twilight Sparkle to me and I don't even know why. @.@ Even knowing that the bodies are supposed to be tiny, I still drew them a little too large. It's just ... weird.

In theory, I don't think of fan art as the highest and best use of my creative energy. In practice, pretty much all the art I do is fan art, albeit usually for more obscure fandoms. So, I don't know, maybe I'll draw more ponies if the mood strikes me. I'm pretty sure that drawing ponies is what I did instead of playing more Star Wars: the Old Republic, not what I did instead of writing fiction, so what the heck. It's all good.
Collapse