tuftears did lovely sketches of the fanciest outfits described in my story-in-progress, "A Rational Arrangement".

I am always frustrated by trying to describe characters in text, partly because I don't know how to describe facial features with any precision, and partly because descriptions don't stick with readers. (I know they don't stick with me.) I had the urge today to try drawing them instead. This went much better than the last few times I tried drawing a character, but none of the sketches are actually right. 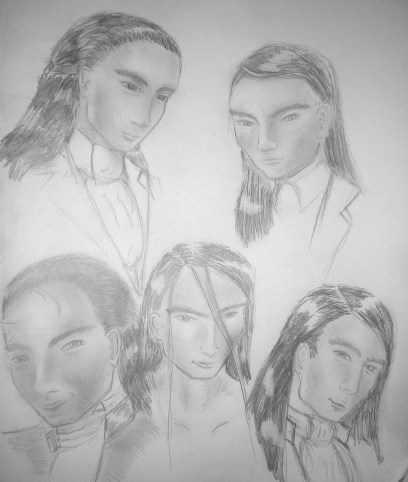 The upper-right corner sketch is closest to what his features look like (though the face seems too triangular, too steep a slope from top of cheek to chin), and the middle bottom is closest to the kind of expression he'd have. The hair style on the left ones, with the top pulled back and the rest loose, is how he typically wears his head, which falls to mid-back.

I realized that a couple of my problems is that I want to describe subtleties in features: Justin's chin and jawline are squared-off a bit, but he's not "square-jawed"; his nose should be wide-ish and slightly bumpy, but not to the point of caricature. And anything I write sounds like caricature. He is handsome but not flawless, his face masculine but not exaggeratedly so. He should look somewhat Asian, which is a totally useless descriptor in a fantasy world that doesn't have any Earth-equivalents. x_x

Anyway, not sure if I'll keep trying to sketch the other characters or not.
Collapse