Circle II Circle was up next. They have the same lead singer Savatage had for several years, Zak Stevens. They did one Savatage song, "Edge of Thorns". That's one of two songs I heard Thursday night that I had heard before. I enjoyed Circle II Circle but was having a hard time distinguishing one song from the next by the time they finished. They had one guitarist in particular who was strikingly good-looking: well-muscled, tan skin, long straight dark hair. Alinsa was taking pictures with a $3000 camera borrowed from a friend for the show, and put it away halfway through their set. Then I nudged Alinsa and pointed: the hot guitarist had taken off his tanktop. So Alinsa got the camera back out. XD

We stalked the Circle II Circle band backstage after their set, because Alinsa was encouraging me to get a picture with Bill Hudson, the handsome guitarist. I got a picture with Zak Stevens too, which was even cooler in a way -- someone whose work I already knew, independently of this event. I was not sure of the etiquette involved in "getting photograph with band member", so I wanted to ask before I touched him. For reasons hard to explain, I phrased it as: "Is it okay if I grope you?"

Zak Stevens put his arm around my shoulders, looking at the camera. "Sure. Wait, what? Grope me?"

I only put my hand on his waist, promise. 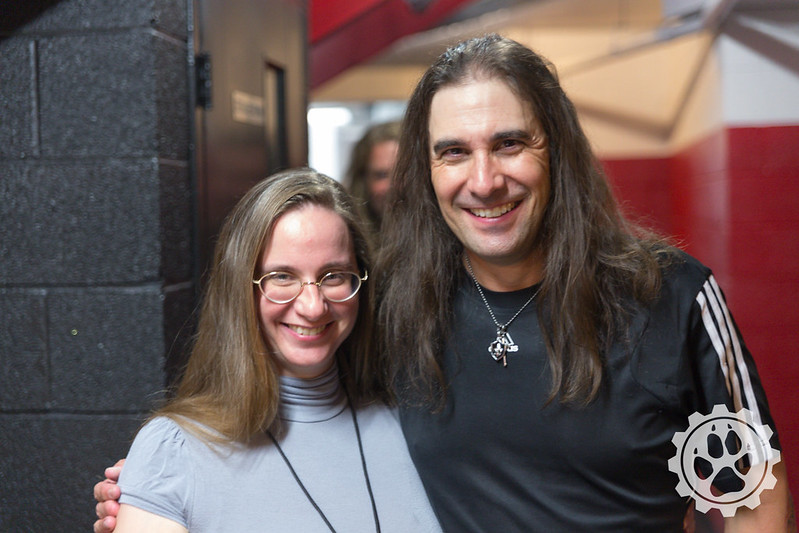 I got a picture with Bill Hudson, too, and then we went back into the theater for Rhapsody.

Rhapsody, alas, kind of blurred together into a wall of sound for me. I did like the pacing on their set, with segues between pieces instead of breakpoints, and some video interludes. I only know two Rhapsody songs but they played one of them, so that was fun for me. We were watching them from in front of the barrier, after spending Circle II Circle's set seated in the tiers by way of getting some rest before the headliner. By chance, Alinsa had picked the correct side of the stage to stand on -- we were right in front of Mikko's keyboard, and one of the stage speakers had been pushed and angled for Mikko's use so it wasn't blocking the view the way the other stage speakers did. During the set, Turilli would come to the edge of the stage right in front of us, playing his guitar. I danced for almost the entire set, aside from a couple of times when the band was offstage for a video interlude. Then I sat down on the benches in front of the barrier, to the shock of the security guard. "She has a VIP pass! She's not supposed to want to sit down." It was a good performance, that I would've enjoyed more if I'd actually been familiar with their work. Possibly also if I'd been more alert.

I had thought of asking Mikko for a picture earlier but was too shy to ask at dinner, so we stalked backstage after Rhapsody's set too. In the Silence's bassist, Dennis, was back there as well, showing off his ProgPower souvenir, a small piece of plastic with a snap on it, a bit of wire, and a blob of solder. It was very obviously torn at the bottom. It had, he explained, come off his guitar during soundcheck. With the result that the guitar stopped working. He'd shown it to one of the techs. "Dude, I dunno if you can fix this -- " "You mean you need one of these?" The tech whipped out a replacement piece, soldered it on, and had it back to him before they finished sound check. Dennis was in awe.

Shortly thereafter, a man with long curly hair came backstage carrying two guitars. Dennis pounced him. "This is my hero! He fixed my guitar! I want a picture with this guy! Someone take these guitars."

So a band member insisted on a photo with a crew member. It was adorable.

I told Dennis that In the Silence had been my favorite act (which they were!), and thanked him for being there. "Thank you!" he said, "We are so honored just to be here." He was obviously super happy to be performing at ProgPower. "If this band ever broke up, I think we'd get back together each year just for this show. If we wanted to kill each other, we'd suspend the vendetta just for these four days." They were staying for the rest of the weekend to see all the other acts perform. Quite a few bands do so at ProgPower, if they don't have packed touring schedules (like Rhapsody, whom I think were flying out not long after their set finished.)

I asked Dennis for a picture, and he said "Sure! Hey, let me round up the whole band for you." And then he wandered around collaring a couple of band members -- "We should do pictures!" -- going off to find another two, come back -- "Where'd Josh go? This is like herding cats!"

Eventually, he did manage to get them all in one place at one time, so I have a picture of myself surrounded by a rock band. "I am the luckiest girl ever." 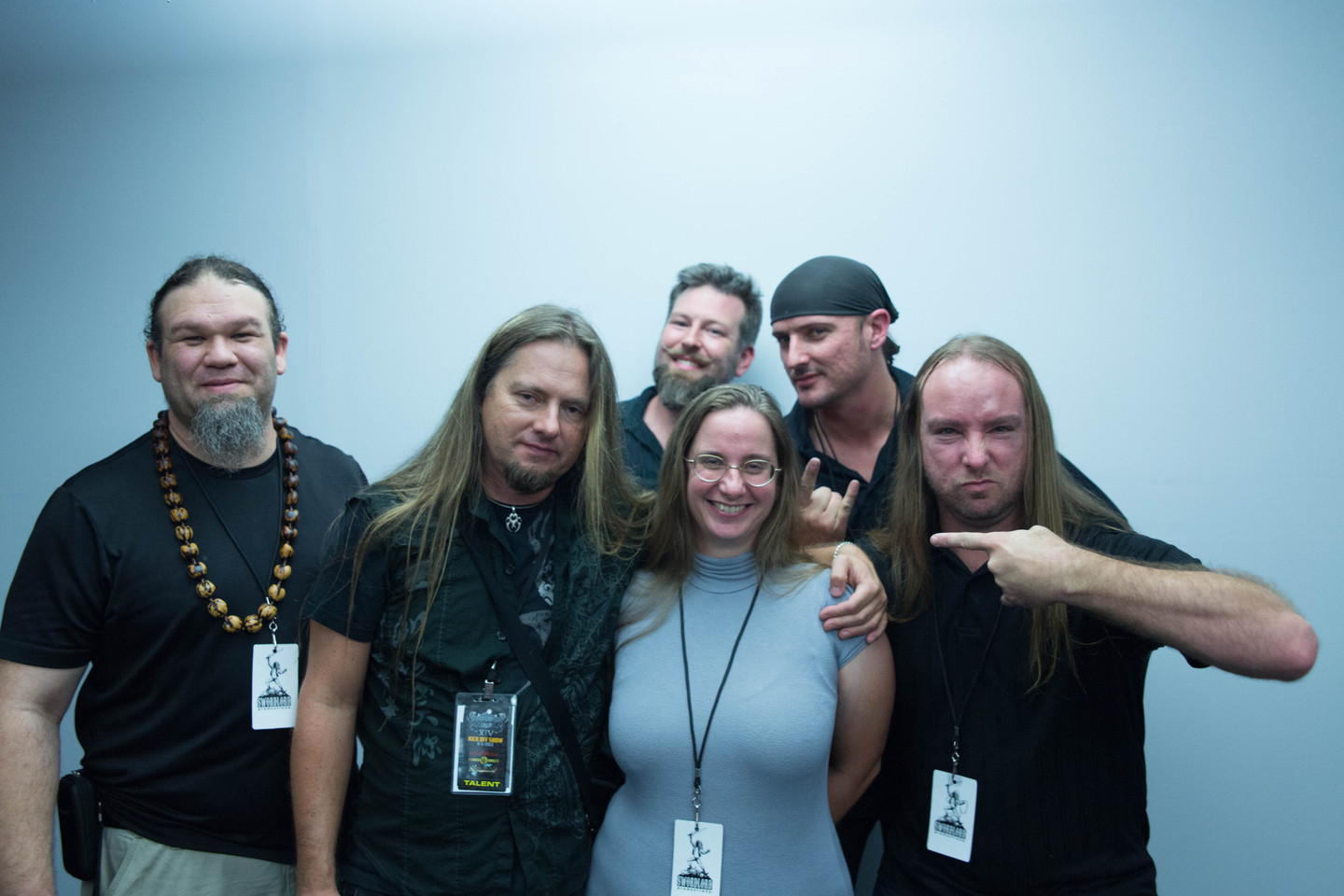 That's Dennis Davis on my right, pointing at me, Jarek Tatarek (flown in for the one song with the guitarviol on my left, Josh Burke behind me doing the horns (throwing the horns is a ProgPower tradition), and the other two are Nate Higgins and Niko Panagopolous..

I got a photo with Mikko too, and told him how great Rhapsody had been, and we hung about for a bit just enjoying the conversation. Dennis talked about getting energy from the show and posed with his hands in claws, like energy was shooting out of them, then on his toes with hands outstretched, as if being electrified. I suggested he get a shot of himself in the outstretched pose with Nathan (the show organizer) behind him doing the claw-hand pose. "That's a great idea! Hey, Nathan!"

We went back to the Artmore after that. The Artmore is entirely occupied by ProgPower attendees, and 100+ people hang out in the courtyard partying after the last concert ends. Alinsa and I sat down on a couch in the courtyard for a quarter-hour chatting, and then I decided I ought to try being social with the crowd. A man standing nearby was wearing black leather boots literally covered in metal spikes and strips, so I complimented him on them. He explained the construction (boots, plus one large piece of leather buckled over each boot, with bands of spiked and metal collars riveted/strapped/hotglued to the leather over-pieces) and introduced himself as Nicholas. Jose introduced himself at about the same time: he was working one of the vendor booths at the show. He wanted a beer. We hadn't gotten any, but I jokingly offered to sell him one from the selection of overpriced drinks the hotel stocked in the fridge in our room. He actually took us up on it.

Dennis and Josh showed up, and I ended up getting Dennis a bottled water from the fridge too. One of the other attendees wanted to hear Josh play acoustic, and had brought down a guitar after Josh agreed. So Josh sat on a free spot on one of the empty couches and started playing. The guy next to him left, so I took his seat and leaned forward to watch his fingering. (Another attendee caught this on camera and put it on his Facebook, here.) Which was astonishingly complex. It was hard to hear - there was no other music in the courtyard but the crowd noise alone was LOUD. We stayed up until around 2AM listening, then I had to crash. The hotel breakfast closed at 9:30AM (most reliable meal of the day!) and the VIP orientation for the show proper was at 11AM. Not to mention I was tired. z_z
Collapse