Shadow Gallery opened by playing a recorded "Bohemian Rhapsody". All the VIP badge holders packed in front of the barrier -- whether you sponsored a particular band or not, if you get a VIP badge you can stand before the barrier for the first two songs. We didn't try to crowd there with them, given how tight-packed it was. So we stood before front-row seats to one side to watch the first songs. Koogrr arrived at the hotel during the middle of the second Shadow Gallery song: we texted him to crash in the room, since he'd been tired before he started the drive, while we stayed for the rest of the show.

Once the second song finished, the mob left the area in front of the barrier and we went in. At that point, there was lots of space for me to stretch out and dance like mad to every song. Which I did. 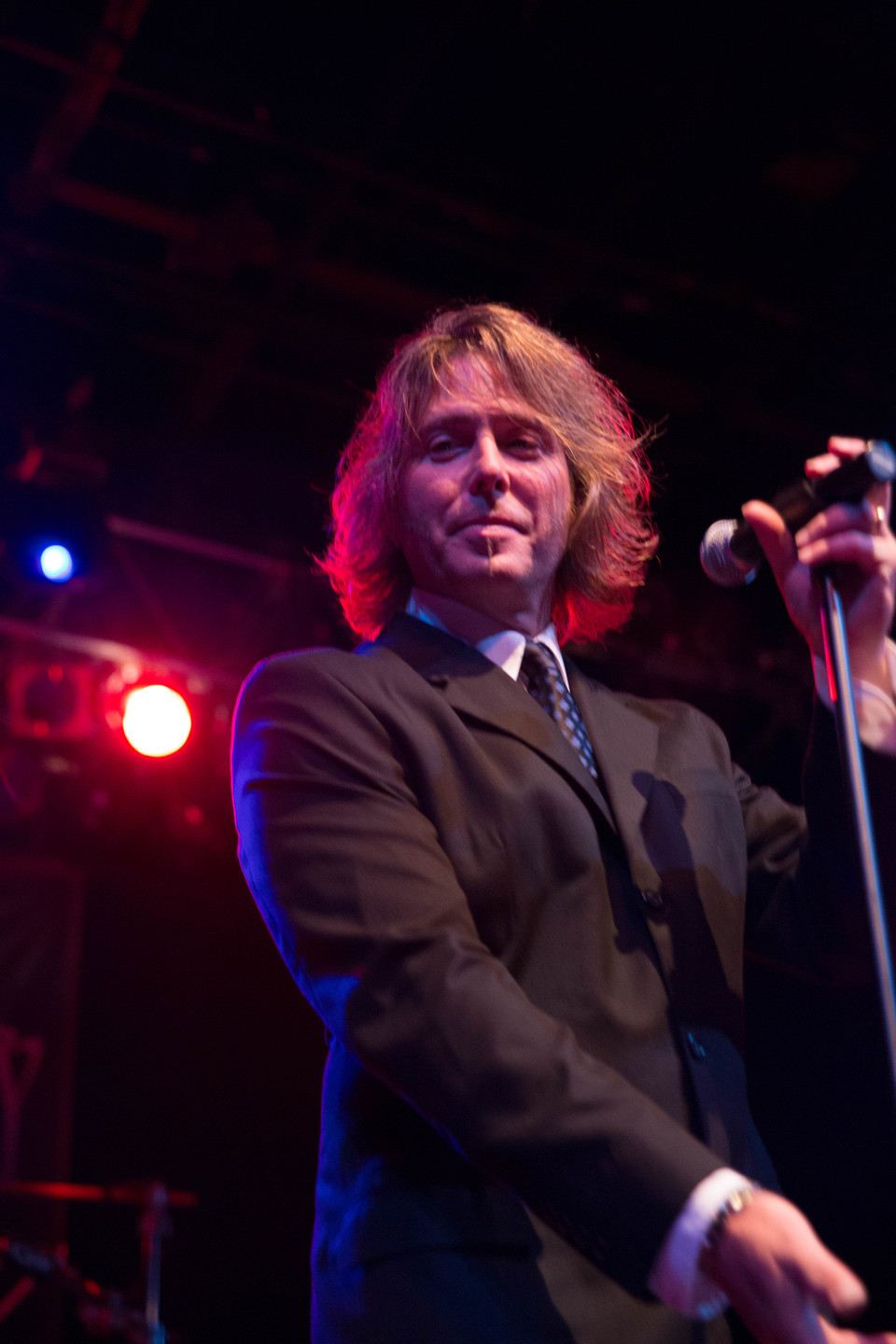 Shadow Gallery was magnificent. They sounded great and I am looking forward to listening to more of their stuff. It had been 15 years since their first album, "Tyranny", and they performed several songs from it. The lead singer said at one point, "So we're celebrating fifteen years of "Tyranny"!" and the audience cheered wildly. I started to cheer with them, then stopped because -- 'wait, what? That just sounds wrong.' :D It's a story album, with one of the protagonists being a former corporate man turned hacker when he realizes his corporation is actively evil. The band had flown in D. C. Cooper to sing the corporation part of the songs, who came out in suit and tie, looking snazzy and projecting an aura of menace. Very effective, very fun.

During their encore, they played a new unreleased song, "Dust" (I think). Alinsa had the camera out and was photographing the guitarists during the song's bridge, and I was dancing madly, when the singer started again. We looked for him onstage and didn't see him. Then I looked to my side and he was like two feet away from me, in the pit with us! So I got to dance with him after a fashion, and Alinsa got pictures of him singing straight at the camera. He made a point of clasping hands with the people reaching out to him over the barrier. It was a wonderful moment. 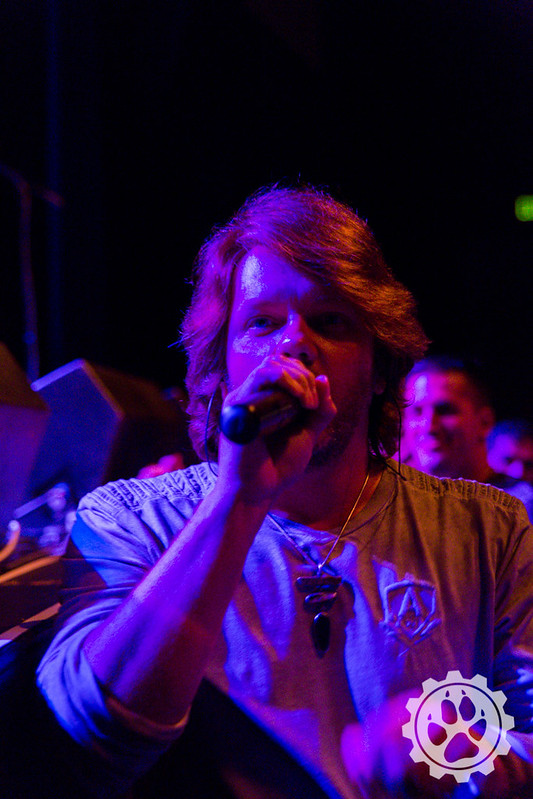 After they finished their encore with "Crystalline Dream", we went backstage to meet the band once they decompressed. Two of the charming guitarists invited everyone into the (spacious) dressing room. I wanted to compliment the drummer on his drum solo, which was really something to watch -- he was, among other things, playing the drumset cage and pounding drums and cymbals with his fists, at various points. Sounded great and was spectacular to see. The drummer slipped away early, though, to go pack up. "We're poor," the lead singer explained to us, "so we don't have a crew." They've been mostly a studio band, and didn't tour much, although the singer, Brian Ashland, was trying to change that. He was relatively new to the band -- they've been around since 1991 but their original vocalist passed away in 2008, and Brian Ashland joined after that. He was very approachable, turning to smile at us when we approached and happy to pose for pictures. 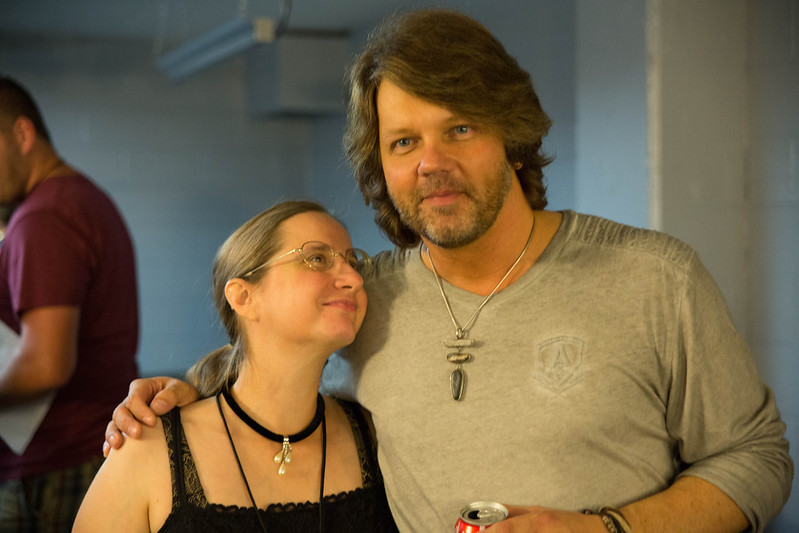 Alinsa was particularly amused when one of the guitarists, Carl-Cadden James, was encouraging a VIP badgeholder to go on into the dressing room while we were leaving. "Go ahead, make yourself at home."

"DUDE. GO IN. HAVE A BEER." There was a cooler full of beers just inside the door.

Alinsa, laughing: "I've never heard the band pressure someone to go into the dressing room before."

I got a picture with James, too, because he was so friendly, and he'd been great fun to watch onstage, full of energy and smiling like he was having the time of his life.

Eventually we left to return to the hotel room. We woke John up coming in, and talked with him until 3AM or so. We didn't make it out to the courtyard party that night because we were all pretty wiped out, not to mention had plenty enough to talk about amongst ourselves.

Saturday, the three of us slept through (or at least lazed in bed through) the hotel breakfast, so we went out for a late brunch, finally hitting a restaurant around quarter to one. We got back to the theater partway through Divinity Compromised's set, watched the rest of it, then wandered the dealer's room until the next act went on. We bought various swag, including two copies of In the Silence's "A Fair Dream Gone Mad", ProgPower banners for 2012 & 2013 (the only years they've done them thus far), and more music from Jose's table, which turned out to have the best selection of Sabaton out of all the dealers. We wanted to get a Sabaton album for John since he wouldn't be able to stay late enough to see them perform.

Alinsa found Sue at the ProgPower t-shirt table and arranged for her to fetch a bag of her "drunken gummies" (gummi bears soaked in vodka for several weeks) to exchange for chocolates Alinsa had brought.

We went back into the theater when Heaven's Cry started their set. They were not bad (I didn't hear any bands this weekend that I thought were bad), but I was not too into them and neither was John, so we left to get a chance to talk some more. We came back in time for Wolf, which is another act that I can't tell you anything about except I thought they sounded good.

After Wolf was done, we sat in the lobby for a bit. I spotted Dennis and snagged him. "Come here, I want you to meet my friend!"

"Sure, just let me do this one thing." Dennis finished up something-or-other and I got to introduce him to John. He hung around with us for a few minutes chatting, then said "Hey, have you gotten a t-shirt yet? Would you like one? I'll trade you one for, say, a Red Bull and a gin and tonic? We really don't want to have to cart this back and I'm dying for a drink." Thus I got an In The Silence t-shirt, which I'd been tempted to get anyway, despite my existing surfeit of t-shirts. :D (I had already made my saving throw vs ProgPower t-shirt multiple times).

Circus Maximus was the next act, and my second-favorite for Saturday. I enjoyed their set and should give more of their work a listen at some point. They were John's last act of the day -- he had to be back at work in Savannah at 6AM Sunday, gah), so we all took a break to go back to the hotel and say goodbye. I took the liner notes for the In the Silence and Sabaton albums that he'd gotten, so I could try to get them signed for him.

Alinsa and I crashed briefly after John left, but we didn't have enough time to get much of a nap before heading back to the theater to pick up barrier passes for Sabaton. (The VIP passes get us into the show and in front of the barrier for two songs, but for the band you sponsor, you need to see Glenn at the end of the set for the previous band so he can give you a pass good for the whole set of the one you're sponsoring.) 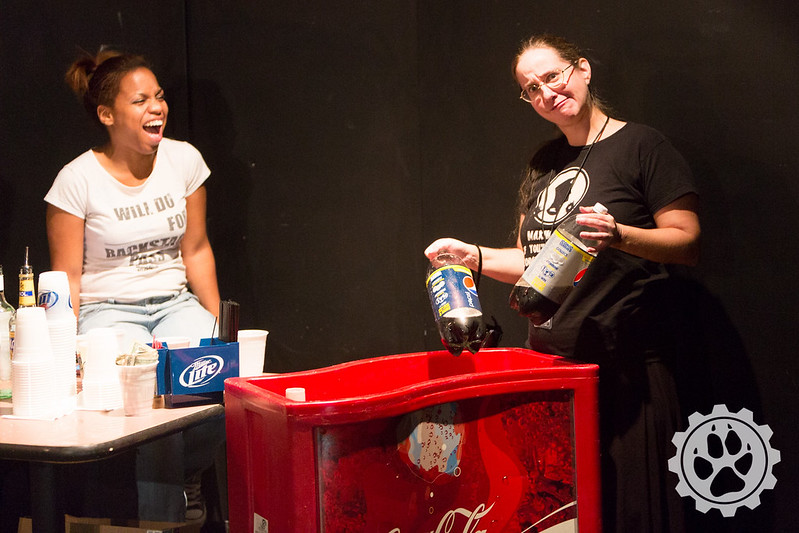 Armored Saint was running a little late, so we caught the last couple songs for them, then got our barrier passes (little badges that say "BTFO"), then trundled up to the VIP lounge to watch from there. The VIP lounge overlooks the stage from the side, so gives a good view of the set up. The VIP bar had a giant Coca-Cola cooler, which made me do a double-take. I walked over to look inside, and yes, they were selling Pepsi out of their Coca-Cola cooler. I made Alinsa get pictures, which cracked the bartender up.
Collapse