We got to watch Sabaton's members stretching after the lights went down and they piped "The Final Countdown" out to the audience. The crowd was going wild waiting for the band to come on, but we could see them in a little stairwell waiting, so knew it was still gonna be a bit.

They opened with "Ghost Division", a song I actually recognized! We listened to it from the VIP lounge, and then went back into the theater proper to hear the next, because the sound backstage wasn't great. At the end of the second song we took station before the stage, towards the right side near one of the guitarists, Chris Rörland.

Sabaton was awesome, and I use that in the sense of "I was awed by them". They were worth the price of admission by themselves. The music was fantastic and they were all terrific performers. Not only the lead singer but the guitarists roamed the full stage (though they returned regularly to the same mike stands). They made eye contact with the audience and had expressive faces, smiling, pantomining to the music, clowning between songs. They were constantly in motion, dancing, bouncing, pumping fists. Joakim Brodén, the lead singer, was in great condition, and watching him perform one could almost imagine that his regular concert performance was enough of a workout by itself to maintain that shape.

And they sounded incredible, powerful, fully engaged, infectiously energetic. I danced, whooped, screamed, fist-pumped and made the ProgPower-horns sign throughout the entire set.

This resulted in one particularly humorous moment. Towards the end of the show, I was making the horns sign with one hand (index and pinky raised, thumb holding down middle two fingers) and pumping my arm towards the singer. This meant folding my arm back until my hand was level with my ear and then throwing my hand forward, pinky and index out. At one point, as I was drawing my hand forward, my index finger snagged the arm of my glasses. Before I had time to realized what had happened, I finished the motion and incidentally flung my glasses thirty feet onto the stage, to land just before the drumset. 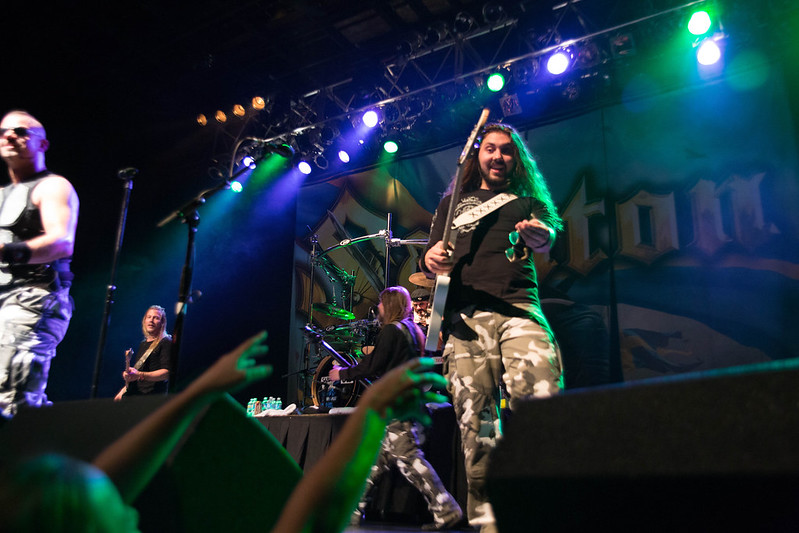 I stood there, blinking, watching guitarists run back and forth across the stage, and hoping none of them stepped on my glasses. When the current song finished, I gestured frantically to Chris Rörland, who was only ten feet or so away from me. I caught his attention (did I mention they were good about making eye contact? They were), pantomined glasses, and pointed. Miraculously, he figured out what had happened, ran over, fetched my glasses, and brought them back to me.

They were the only band who, when they finished, no part of me was thinking "that's okay because I'm ready for a break now anyway". I was all "I could totally dance through another album or two! I'm good! PRIMO VICTORIA!"

On our way backstage to see the band, one of the other concert-attendees gave me a thumbs-up -- not for flinging my glasses at the stage, but for my Schlock Mercenary t-shirt. :D

The band was a blast backstage too. I got a hug from Rörland, who immediately recognized me as 'that woman dancing in the front row who threw her glasses on the stage.' 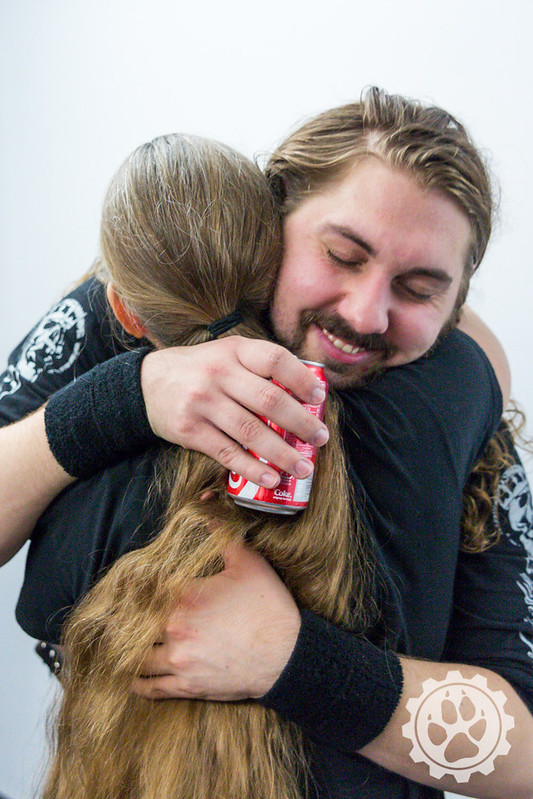 Me: "So, has anyone ever thrown glasses on the stage before?"
Rörland: "No, that was a first. We throw sunglasses off the stage every show, but they've never come to us before."

At one point, someone called for the band to "get up against the wall!" for pictures. Joakim Brodén was the first to comply, and he stood spread-eagled for a pat-down, looking back over his shoulder with a "this is what you meant, right?" expression. Most of the band joined him in the same pose before they switched to more standard poses. Then like half of the VIPs snuck in one by one to get pics with the band, including me.

I went around collecting signatures on the Sabaton liner notes for John. One of the other attendees asked Brodén to sign the set list. "Can you write "Marie, we love you"? on it?" he asked.

"Sure." Brodén put the set list on his knee and started writing. "Marie, we love you. But NEVER MISS another Sabaton show again." And passed it around for the rest of the band to sign.

Finally, we wandered off back to the hotel.

The people from Sabaton, like pretty much all the band members we had interacted with, were really friendly and agreeable. I don't know what it takes to still be happy after the 10,000th fan asks for a signature or picture with you, but these guys have it. I'm sure it helped in our case that there were only a fifteen or twenty respectful fans and not a screaming, pressing mob of us, but even so. I would totally have understood if I'd run into one of them who was stressed/tired/did not want to deal with people and so blew us off, but that never happened. It was a uniformly enjoyable experience. Very happy I went, and for me having Sabaton be the closing act was perfect, because nothing else was going to match up to their performance. n_n

howardtayler, I was advertising your webcomic! I brought the "Pillage first" t-shirt too, but I think I wore it Wednesday night and didn't get any pictures. 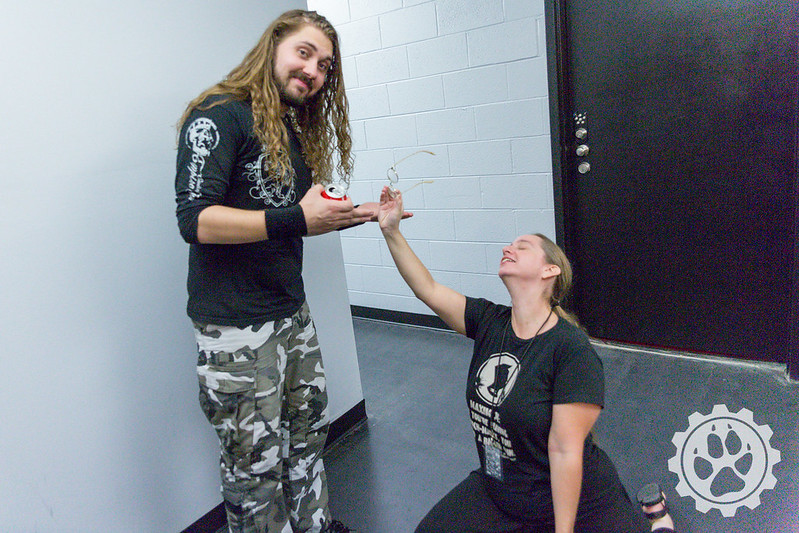 Back at the hotel, we went to the courtyard party and distributed the cupcakes from Truly Great Cupcakes that Alinsa had ordered, and the two free drink coupons the hotel had given us for mixing up our room earlier. I gave one drink coupon to Jarek and the other to Dennis, and then collected signatures on the In the Silence CD liners. Amusingly, every previous time I saw Dennis signing something, Jarek would make fun of him for including a note: "What are you writing, a book?" But on my CD liner, Dennis only signed it while Jarek left a note. :D

Dennis had mentioned earlier that "I am dead tired and wasn't going to come tonight, but then Mike caught me and said 'I've got Kraken rum, see you tonight!' and before I realized what I'd done I'd agreed." Dennis invited us up to the room party later. We'd made the circuit of the courtyard, dispensing cupcakes while Alinsa looked around for Su (in order to deliver the chocolates) but couldn't find her. So we went up to the room party, and after a little bit: Su! I was sitting at the table in the room when Alinsa went out into the hall to see Su. An ear-piercing squeal of glee followed moments thereafter. "Ah, Alinsa finally got the chocolates to Su."

We hung about the room for a while, then the party decided en masse to go back to the courtyard. "We'll bring the rum!" Dennis danced down the stairwell, singing "Pure Imagination" from the Gene Wilder "Willy Wonka and the Chocolate Factory" film.

In the courtyard, I put my tiny hat on Dennis's head for no good reason, and Alinsa got a surprisingly good picture of him in it: 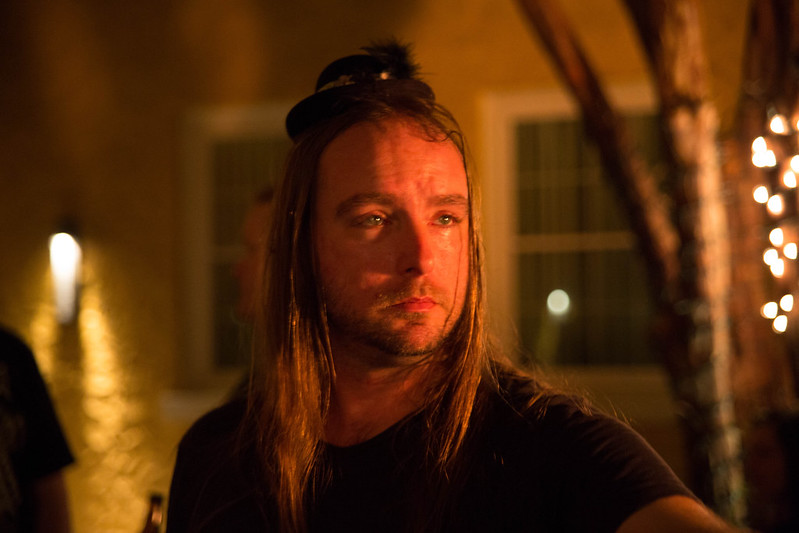 Dennis gave us his card and insisted on getting our email addresses. ♥

We went to bed shortly afterwards, but I will close with one little event from Sunday, after the show:

While we were at the airport, we saw the lead singer from Xandria also in line for security. She gave us a look as if we were familiar, which surprised me because we'd watched their set from way back in the theater, and had not gone backstage to meet the band afterwards. I said hi and told her we'd liked her show, and she said, "Thanks! I recognized your 'In the Silence' t-shirt." :)

This is not only about Flight Rising, but it's not even cute story bits. So cut-tag!
( Collapse )
Collapse