[Edit: I've closed this poll because I've made a new poll here with MUCH BETTER options.)

I plan to self-publish A Rational Arrangement in June, and want to have a name for my publishing business. Since I plan to publish under a pseudonym (it's easier to use my existing hand than it is to establish a web presence under my real name), I need to register some name with the state anyway, so I might as well register a publishing company and make it all official-like. I Are a Real Business!

Step one of this (very complicated) process:

Since I am not attached to any of the names I've come up with thus far, I figured I would use the time-honored Make It A Poll approach*!

This poll is closed.

Open to: All, detailed results viewable to: All. Participants: 10

What should Rowyn name her publishing house and/or imprint?

alinsa's idea), but I am concerned it sounds like "romance for rationalists", which is not what I am writing. (Nothing against rationalists!) Also, only particularly applicable to this one book. On the other hand, I can always make another publisher name, and probably will want to regardless because publishing lines are associated with genre, and I don't only write romances.

* I do not promise to use whichever name gets the most votes.

One of the other things* I need before I can publish is a cover. I started work on this a couple of months ago, found it depressing and overwhelming, and gave up for a while. Friday I decided to take another stab at it. Today I figured I would post about it and see what people think.

My first concept was simple -- black background, white text, three riings to symbolize "polyamorous romance". I was appalled by the first attempt and decided to try a different color scheme.  I'm putting this one up mainly because Lut liked the black & white color scheme better than the one I preferred.  The "three rings" are from a public domain photo. The brown-and-gold one below is the first one I considered adequate. The ring image is a modified version of this photo by Jeff Belmonte, which is licensed on CC 2.0. 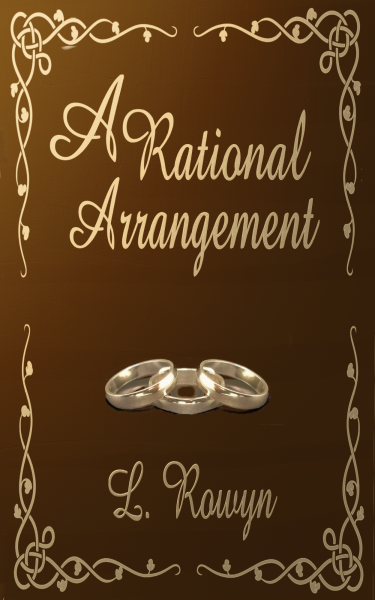 After doing the one above, I spend some time thinking about what image I'd want if I used an illustration instead of a symbol.  I looked at other romance covers for inspiration. This cover, for The Wrong Mr. Wright, made me think of showing the three protagonists dancing, which is even something that happens in the book. And then I gave up for a while, because my art skillz are not remotely qualified to do a realistic painting.

But since I've been doing all the header illustrations, I figured I could try doing the same style for a cover illustration. I spent Friday and today working at it.  It doesn't look like it would take that long, does it? 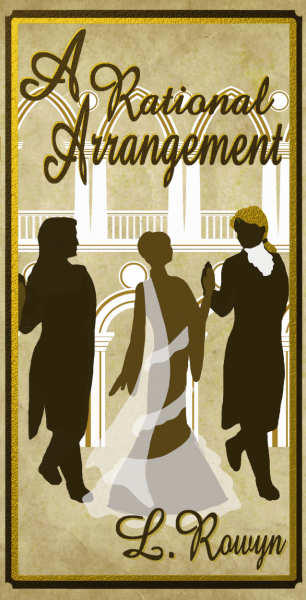 Also, somehow the ratio on it is different from the others. I am not sure what happened there.

The typeface is Amazone BT (squished and re-kerned here and there). I made a list of 27 different fonts that I already owned and liked for the cover, and then every time I went to actually do the lettering, I used Amazone BT instead of trying one of the others. I dunno what's up with that.

None of these are exactly done; for instance, on the last one I don't like the way the title text interacts with the background arches (I spent a lot of time on those arches! Grrrr backgrounds. Now I have to spend more time on them, or possibly just rip them out. You will see more of these in a future header, and Now You Know Why. Because I am not going to have wasted all that time drawing them.)

Here's a poll if you want to pick your favorite(s):

Open to: All, detailed results viewable to: All. Participants: 14

Which of the three do you think works best as the cover for a polyamorous fantasy romance novel?

Suggestions welcome! (Though I may not take them, due to time/money/psych lim contraints.)

* There are so many things, you guys. So. Many. THINGS.

terrycloth offered the BEST NAME EVER.

Seriously, I love this name. It is a name so good that I actually want to publish books*! I need to write more books JUST SO I CAN PRINT THEM UNDER THIS COMPANY NAME.

Is it not nifty?

Okay, so it may be just me who thinks this is the awesome name of awesome. For those of you who don't know, I used to write a World Tree fanfic under

delight_in_wt. The title character changed her name frequently (a common trait for members of her species in the World Tree setting), but her names had the general format of "Delight in [Whatever]". The name thus has personal meaning for me. Beyond that, it leads easily to imprint names: I can call the business "Delight in Books" and the imprint for A Rational Arrangement can be "Delight in Romances". ("Delight in Fantasies" might sound too erotica for a fantasy imprint, though. Still!)

But since I had some other new ideas too, and there's some small chance that someone could talk me out of "Delight in Books", I'm doing another poll.

haikujaguar pointed out that it was not a great idea for the publisher name to be easily mistaken for the first book I'm publishing, it struck me that what I liked about "Rational Romances" was not just the alliteration, but the seeming (not actual) dissonance between the two ideas. So I'm listing some riffs off of that, which have the virtue of not sounding like my book title. But no alliteration. Not sure I like them.

siege for "Comfrey House" and

whitefangedwolf for "Greatcat Press"). Because I was serious when I said all the suggestions were better than my original choices.

Open to: All, detailed results viewable to: All. Participants: 19

What should Rowyn name her publishing house and/or imprint?

Assuming I pick "Delight in Books" as my business name, should I use "Delight in Romances" as the imprint name for RA?

* The more time I spend on this whole "publishing A Rational Arrangement" thing, the more I am ahhhhh what am I doing why did I think this was a good idea ahhhhhhhhhhh