The "three figures dancing" was more popular than any of my other choices from the previous poll on the cover for A Rational Arrangement, so I've been working on that one. I fixed the ratio* first, and added a bit of the heretofore unseen dancers on the right and left, and made a few adjustments to the figures. I also fiddled a lot with the background in an effort to make the text would stand out better and to make the whole thing look better when it's shrunk down to thumbnail size. This meant ditching my beloved parchment background, which I've used for all the headers so far**. Oh, and

archangelbeth both suggested putting the frame at the very edge of the image, so I did that.

Then I tried text layout again, and branched out from Amazone to experiment with some less-script-like and possibly-more-readable fonts. Also a few different layout choices.

Anyway, I've got four different variants now, I figure I can do a new poll!

You should be able to click on the images to see the full size versions on Flickr. I've thumbnailed them at the size Amazon displays thumbnails on its main page.

Open to: All, detailed results viewable to: All. Participants: 22

Which of these are your favorites? 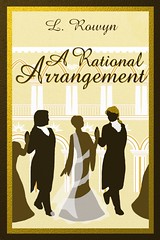 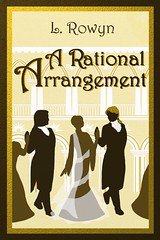 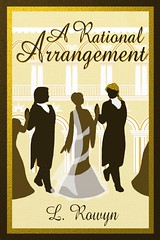 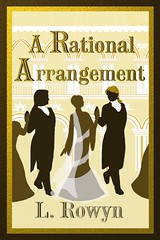 Which of the following elements do you prefer?

@fullaquirkes on Twitter pointed out that I didn't order the images by typeface, or clearly label them. Ack. The images in the poll are:

* Amazon's Kindle site has one ratio in the guidelines for uploading to the site, and a different ratio that they actually display at and that everybody else uses. I dunno what's up with that.

** I am resisting the urge to replace the backdrop for all the existing headers to match the cover. This way lies madness.

Almost halfway through the year and I am still on track with these posts!

Health/Fitness
May was the month of All The Rain. I probably did less than 150 miles on my bike the entire month, and I was insufficiently motivated to do indoor biking. But this weekend was clear and I got out both days, and this week should be good for biking too. Yay!

My diet is not improved. Weight remains about the same.

Writing
I wrote 5 LJ posts: one wrap-up and four related to publishing serializing RA. This is my life now. Somehow it takes more time to publically serialize my finished novel than when I was simultaneously writing the book and serializing it for my beta readers. How does that even work?

I did write a little original fiction: two short scenes in Birthright. And made some more notes for another scene.

Note to self: keep writing original fiction. You've got a plane ride in June to write during anyway.

All the business! I started serializing A Rational Arrangement ij the second week of May, as anyone who is reading this has probably noticed.

terrycloth came up with a publisher name for me: Delight in Books! So now I can do all that paperwork stuff that

alinsa researched for me. I have already begun this, by getting an EIN! Which only took 6 minutes, so didn't hurt at all. The Fictitious Name Registration took a little longer, but still not bad.

Art/Other
I did 23 more headers in May. Officially, I didn't do any headers this weekend. Instead, I worked on cover art. After letting it rest for a while, I decided I liked the papercut-like image of the three dancers after all. Still fiddling with the text.

Gaming
Uhhh ... I think I killed the Elect PBEM again. Dangit, I knew I was forgetting something. >.<

Terrycloth found an adaptation of the boardgame "Small World" for online play. I never liked this game two-player, but I have been playing tons of it (usually making Alinsa and/or Terry play with me) online with additional bot players.

Socializing
I went to LA at the beginning of May, to see

level_head, and a fantastic Nightwish/Sabaton/Delain concert. We also saw the California Science Museum, which had the space shuttle Enterprise on display. Not as cool as seeing Alinsa or Level Head, but still pretty impressive. n.n

I have done nothing else with friends other than Lut in RL since. Ahhhh, the hermit life.

Happiness
I was more stressed in May than in April. The impossibility of Doing Everything weighs on me more than usual, perhaps because I feel like I've been been actually trying. If I'm frittering half my free time on games or webbrowsing, I can imagine I'd get everything done if I just stopped wasting time. When I actually value all the ways I spend my time, I can no longer say that.

On the bright side, I value all the ways I spend my time. So that's cool.

So, still pretty happy with life, and pleasantly surprised by the positive reaction so far to A Rational Arrangement. Thank you, everyone. ♥
Collapse