Bard Bloom has published the Mating Flight duology! This is one of my favorite stories, which I somehow or other have totally failed to write much about on LJ before. *facepalm*

Bard posted about the book launch over on

sythyry. I put together that launch post, so I stuck a recommendation in the middle of it, and I've reviewed Mating Flight: a Non-Romance of Dragons and World in My Claws: Mating Flight Concluded over on Amazon, too.

But I love this series so much that I am going to blather on about it MOAR here. I am even going to say different things!

One of the things I adore about Mating Flight is that, amidst the fantastical backdrop of alien worlds and extraordinarily powerful dragons, Bard depicts wonderfully realistic relationships. I wrote about polyamory in A Rational Arrangement as wish-fulfillment. Obviously, I believe that's a totally valid choice for a story, and I did my best to make the triad in RA plausible and believable. But it's an optimistic and idealized take on the subject. In Mating Flight, Bard depicts a a race of dragons for whom a certain amount of sexual promiscuity if biologically advantageous: dragon eggs must be fertilized multiple times, ideally by multiple different male dragons. Draconic society has chosed to satisfy this biological drive by arranging "mating flights", during which three affianced newly-sexually-mature female dragons and their six affianced newly-sexually-mature male dragons go off together (a) have lots of sex and (b) compete to see which dragoness gets to marry which drake. At the end of the mating-flight there are only going to be three married drakes: sexual promiscuity past that initial period is strictly taboo.

Jyothky, the narrator of both novels, has a mating flight that goes wrong in too many ways to list here, all of which make for a wonderful book. But one of the themes in the novel is "how do you deal with the conflict between individual needs and societal taboos?" and the way the characters grapple with this question is marvelous. Because it's not just a matter of "these taboos are stupid and we're going to do something else and it will be perfect". OK, the taboos may be stupid, but there are still reasons for them and the existing society works well for many dragons. The characters can't just shrug them off, and when they do let their own needs take precedence, it's a struggle to accept the consequences not just of society, but in the resulting complexities of their new relationships. They try to make a new path that works for them, but it's not perfect and it does not solve everything. And I love how real, how genuine it is.

Another great thing -- this story has a large cast: nine dragons of the titular mating flight, plus assorted others. In another book, I'd've had a hard time keeping track of who was who among all the different names. But the characters in Mating Flight are so well-drawn and distinct, with unique voices and personalities, that it was easy to remember exactly who they were and how they related to other characters. Someday, I hope to write characters so well.

I did fan art for this story quite a long time ago, so I'm going to close with that. The small dark dragon in the background on the left is Jyothky, the narrator. The foreground dragon on the right is one of her fiances, Csirnis. 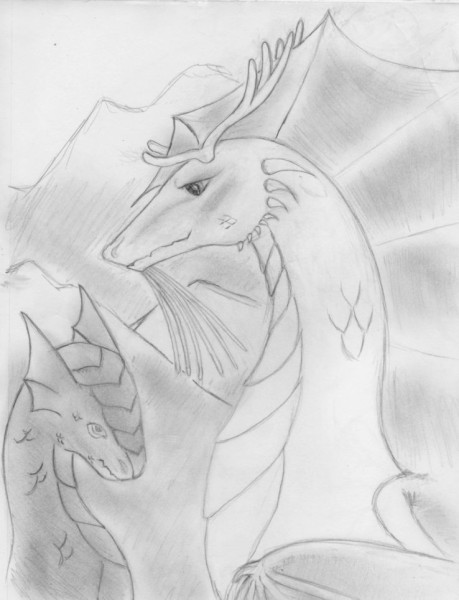