I drew many pictures in 2015! Enough that I decided to do a picture-a-month collage, which I gather is a DeviantArt thing? I don't know if I did it right. Especially since I had to leave January blank because I drew absolutely nothing during it. I didn't start working on headers until April, and February was the first month that I started going to Panera and doing sketches from Twitter user prompts. 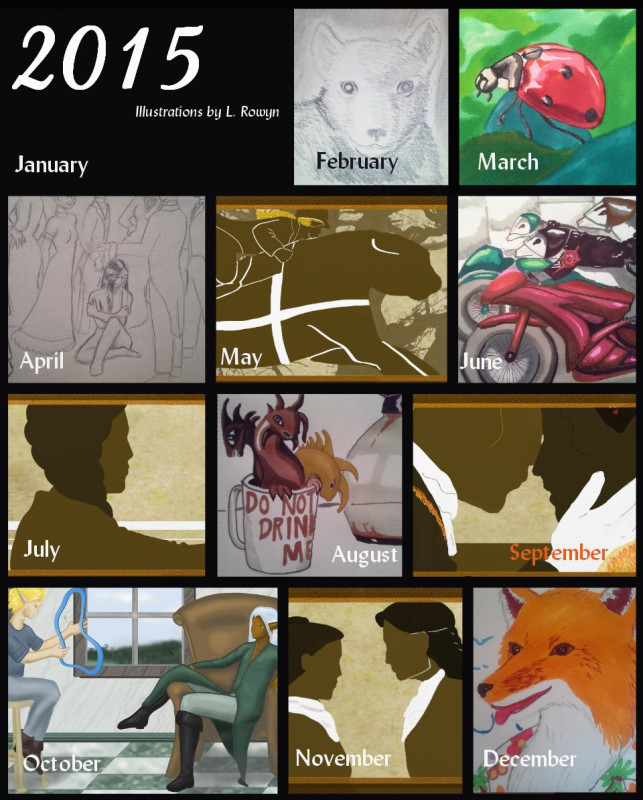 February: a sketch for @ChipUni's prompt of "werewolf cub on moonlit night".
March: A ladybug for

alinsa's Twitter prompt: "Isolation".
May: I could have used headers for every month from April through November, but I wanted some variety. This one is of Anthser and Nikola during the bowrace. I'm using these from the month I completed them, not the month they were posted.
June: For

iron_fox21's "opossum motorcycle gang" prompt on Twitter. The shoulder patch that is too small to read says "Brothers of the Pouch".
July: Wisteria, from the header where Nikola kisses her hand.
August: "Coffeemonsters" for Twitter user @MorganRLevine. The droopy one is the not-enough-coffee monster.
September: Wisteria and Nikola, from the scene of their first kiss.
October: One of the few illustrations that was neither a Twitter prompt nor an RA header! Frost giving a lesson to his apprentice, Thistle.
November: Wisteria and Justin when he called on her after the rescue.
December: From a Twitter prompt: