I am working on the cover for Further Arrangements! That means it's time for a poll!

I originally had three different layout ideas for this cover, each of them a triptych: vertical, horizontal, and triangular. The horizontal layout was the least popular on my Twitter poll, and would require totally different illustrations for each section. But I could do the triangular & vertical layouts using the same illos for two sections, though I had to redraw the third. So I did the vertical layout on Sunday, and then yesterday & Tuesday I pushed things about to make the triangular one. It was more annoying than I'd expected.

I don't like the separators for the triangular layout at all. and I miss having the twee cat-tail-heart-shape. Even though it is very very twee. I think the triangular layout is a better use of space, but I'm still not sure. Maybe I just need to re-do the cats? Maybe there's not enough whitespace in the triangular version? I DON'T KNOW I HAVE NO MEASURABLE GRAPHIC DESIGNS SKILLS HELP.

alinsa used on RA. Final one will match RA's. 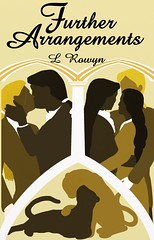 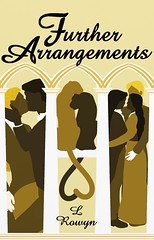 Open to: All, detailed results viewable to: All. Participants: 21

If I use the triangular layout, should I re-do the cats?

You can click on the images to enlarge. They're displayed at approximately Amazon-preview-size, because that is the size they will be most often viewed at prior to purchase. This is the size I want them to look best at.