Since my last update, I have:

terrycloth pointed out this obvious solution to the "it's invisible at thumbnail size" issue. I actually don't mind it being invisible -- I think that looks better than the solid white -- but the dark looks fine too. Pix and poll a new below!
* Written three scenes and completed one bullet point for Birthright. I wrote slightly more words in one more day than I did last week, and realized that I am still obsessed with word count. I really don't need to worry about words, because this manuscript is almost 50,000 words and only 20-25% of the way through the story. There will be plenty enough words before it's done. So I am going to stop recording words written and only focus on scenes & bullet points completed.
* Wrote a back cover blurb for FA. I'd like to improve this before the publication date, but it's good to have something.
* Asked the SFWA new release newsletter to include Further Arrangements in the February newsletter. Gave FA a release date of February 2. 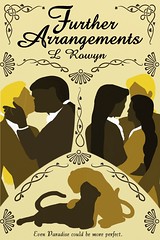 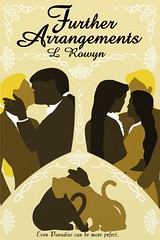 Open to: All, detailed results viewable to: All. Participants: 24

Which trim do you prefer?