These are the sale figures for my polyamorous fantasy romance novel, A Rational Arrangement. (Buy it here! Amazon ~ Kobo ~ Nook ~ iBooks ~ Print). With new, bonus sales figures for the second book, Further Arrangements! 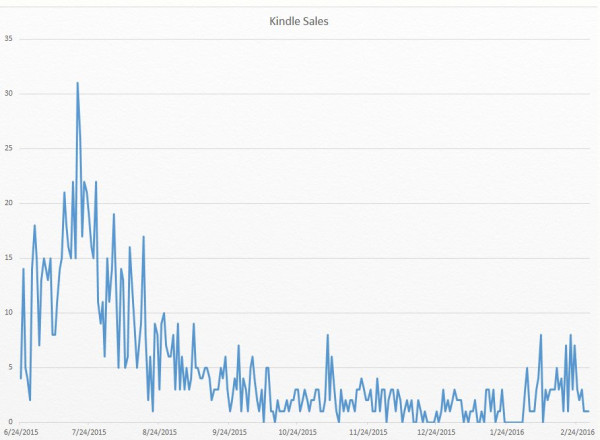 (This graph is only Amazon Kindle sales, because only Amazon breaks out sales by day. I generated it in Excel, though, since Amazon will only generate a graph for the last three months or less.)

Total Sales of A Rational Arrangement:

Miscellaneous sales: Draft2Digital sold 13 units of either FA or RA in February, and won't tell me which sales go with which book until next month.  You're a little behind the reporting curve here, D2D.

I am taking advantage of February being a short month to change these posts from "monthiversary"  numbers that run from the 29th to the 28th, to month-end numbers.

As expected, the release of Further Arrangements perked up sales for A Rational Arrangement. I put both books on sale for $2.99, which also contributed to the rise in sales. (RA got 3-4 sales at $2.99 before I announced the sale, after a week of zero sales).

This was a nice bump: more sales than RA'd had in four months.

As also expected, Further Arrangement outsold RA, though by less than I'd anticipated. Both books were priced at 2.99 for much of the month, because I goofed on sale pricing by forgetting to update the D2D prices, and Amazon price-matched RA at $2.99 for an extra 10 days or so after I meant to end the sale. Whoops. Anyway, total income is about what it was back in September (the third month).

I'd hoped FA would sell 50% of what RA sold in its launch month. Actual unit sales were 32%: not dismal, but not great.  The upside of this: I've been working on Birthright, an epic fantasy novel in a different setting from the Arranging Paradise books.  If RA and FA had combined to reach the sales hights of July/August, I would feel more like I ought to work on a new Arranging Paradise romance instead.  As it is, I feel free to try my hand at a different subgenre and see how what the market thinks of it.
Collapse