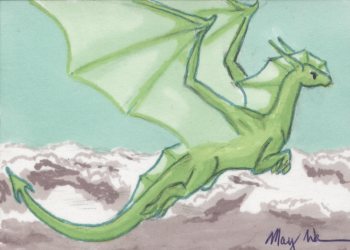 I finished the first draft of Birthright today! \o/

It needs All The Editing still: this is the roughest draft I've ever finished. But I told myself that I would take a break from this book once I finished the draft, so I do not plan to begin editing it for at least a month or so.
I talked to Bard about its book series, Mating Flight, and it struck me that an astral dragon mating flight might make for a fun RP setting. For those not familiar with the setting (available at Amazon! First book here! also serialized on

sythyry), a "mating flight" consists of 9 dragons: 3 females, 6 males.  The females compete for the right to choose first for a husband among the males, and the males compete to be the first dragon chosen.  The dragons have vast magical and physical powers, and are stereotypically interested in hoarding rare and valuable items, in controlling territory (which only mated pairs may do), and in amassing honor (more-or-less defined as "demonstrating one's physical prowess" and "respecting the rules of draconic society".)  The mating flights stereotypically compete based on physical and sexual prowess.
If I ran this as a game, players would make up some of the dragons on the flight, and NPCs would fill out the rest.
I will see how much interest there is and then decide if I want to run it, and talk to the players about how they want the game structured. Some possible options:

Note: while the mating flights do compete on sex, I would not expect the game to have explicit sex any more than the books do. It'd be about relationships and character choices, not erotica.
I backed the Kickstarter for Storium ages ago, and never gave the site a try. So I might try running a game there. Use of the site is free, though I think there's some advantages to having a paid account. If Storium looks too awkward to use, I'll use a Google group for it, as I've done in the past. In either case, it'll be a play-by-post game, and I'd expect players to post once or more per day.Past experience has been that my games run with great enthusiasm for a few weeks and then peter out before the story arc is complete. So think of it as about the journey, not the destination. O:)
If you'd be interested in playing an astral dragon, leave a comment! Or you can email me (my Gmail account is LadyRowyn) or tweet me on Twitter, or whatever's convenient.
Collapse