I am a couple of weeks late for Bisexual Visibility Week, but I'm gonna write about bisexuality anyway. I don't think the point of the week was to have us all re-cloak when it was over.
I don't think it's a secret that I am bisexual*. I mention it now and again.  I am, in some ways, perfectly comfortable with my sexuality.
But I noticed, during Bisexual Visibility Week, that I was not that comfortable about participating in it. For reasons that mostly boil down to "this is for Real Bisexual People, not you." It's weird to feel that way, after so long thinking I'd finally gotten over being defensive about my sexual orientation. But it bleeds into other things, too.
Ardent, the female protagonist of The Moon Etherium, is bisexual.  At the start of the book, she's not in a relationship.  Over the course of the book, she almost hooks up again with her ex-wife, and ultimately becomes romantically involved with the male protagonist.
Amazon asks for up to seven keywords for every book, and it's a good idea to use all seven because keywords are one of the main ways for readers to discover your book. One of the keywords for The Moon Etherium is "bisexual".  Amazon chose to put it in two LGBT subcategories (one for fantasy and one for romance) and the Romance > Multicultural subcategory.  I don't know what algorithm Amazon uses to figure out the subcategories to use; if I controlled it, I'd've listed it in three fantasy categories, not one fantasy and two romance.
Anyway, I find myself uncomfortable with having The Moon Etherium listed as an LGBT book.  Sure, it's got a bisexual protagonist and, for that matter, nonbinary supporting cast members.  But is that really what LGBT readers are looking for?  Aren't they looking for MM or FF pairings?  Perhaps MMF or MFF triads? Isn't that last the only way to be really bisexual?  Because everyone knows monogamous people can't really be bi.  They're actually hetero- or homosexual, depending on their partner's gender.
You don't need to tell me those last three sentences are BS.  I know perfectly well that's garbage.  I mean, intellectually, I know that.  Emotionally, part of me believes that sexual behavior dictates sexual preference. Unless you're straight, of course.  You can identify as straight without having dated anyone.  That's fine.  But if you identify as bi or gay, you have to prove that, by having sex with members of every gender you claim to be attracted to. No, no, just knowing that you're attracted to them isn't enough.  And it doesn't count if you've only had sex with that gender as part of a threesome with someone of another gender.  You might just like threesomes or something. And really, do one-night stands count?  Or a short term fling?  Honestly, if you were a real bisexual you'd have both male and female long-term partners. (We'll let you off the hook for finding nb ones. Maybe.)
For each "you" in that last paragraph, substitute "I", because I would never have the unmitigated gall to spew such hateful rubbish to anyone but myself.
I am so very tired of thinking these things about myself, but I do.  Among my past and current lovers are ciswomen, transwomen, cismen, and nonbinary people, and my mind still thinks "you're just faking it".  Really, brain? I'm 46. I realized I was bisexual over twenty years ago. Can we stop having this conversation yet? Can we at least not have it about my fictional characters? Can I at least classify Ardent as really bi even though she's not currently in a relationship with both a man and a woman?
No?
No.
I think part of why I wrote Ardent this way was, perhaps, to grapple with my internalized "fake bisexual girl" feelings.  "Here, she was married for decades to a woman and now she's seeing a man and her sexual interest is just not tied to gender and she doesn't have to prove this to anyone". Maybe I thought I could fight for her in the way that I have not been able to fight myself.
I don't know if I can.
But I haven't taken the "bisexual" label off the book yet.
* I like the word "pansexual" better than "bisexual", all things considered.  I am attracted to cis, trans, and nonbinary people of all genders, and I like the way the root "pan" suggests expansiveness.  But bisexual is the more widely recognized term and most people seem to understand it as inclusive.  I'm pretty happy to revisit using the label if people have arguments against it, though. 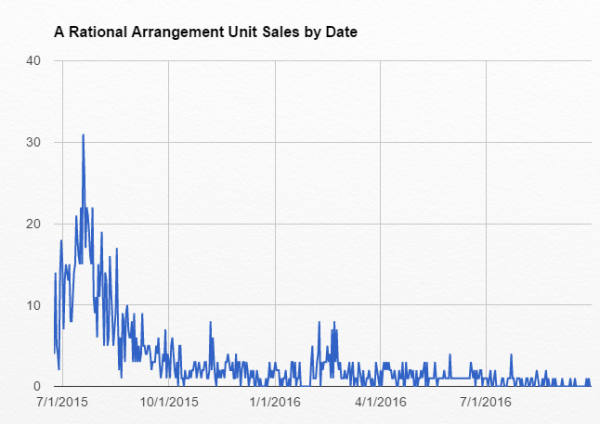 (This graph is only Amazon Kindle sales because Draft2Digital, my distributor for the other book stores, does not break out sales by day. I generated it in Google, though, since Amazon will only generate a graph for the last three months or less.)

First Year Sales by Month of A Rational Arrangement:

I put both books on sale last week, at the same time I released The Moon Etherium. This move probably generated a few sales, but as the low totals show, they're still basically moribund.

The Moon Etherium's first week of sales have not been impressive either: 33 so far. That's about half of Further Arrangements's sales in its first week, and less than a third of A Rational Arrangement's.

My net income for my first year as an author was about $6,400: something like $5500 from ARA and $900 from FA. I'm happy with that total. It's by no means livable as a sole source of income, but it's nonethelesss much better than I'd expected to do by self-publishing. I didn't seriously expect ARA to make even a thousand dollars when I released it, much less over $5000.

I really wanted to write this post because many of my friends saw that first Monthiversary sales report from me back in July 2015, and I think it conjured an image of my sales as much higher overall than they've actually been. Moreover, it might have left the impression that things would only get better: my next books would be as successful or moreso. Not so much.

I don't anticipate that my second year will go as well as my first year. I intend to keep plugging away at this writing gig, regardless. What would I do if I didn't write, anyway? I will probably try some more new things.  Perhaps some of them will work better!  Or worse. Let's find out!