I have acquired New Car. Many thanks to everyone who offered car-buying advice!

It is a 2017 Toyota Corolla LE, chosen for its combination of safety features, size (Lut does not fit well in a subcompact, which is what I'd've bought otherwise), reliability, and price. Telnar offered to walk me through the process of car research via Consumer Reports. I made sad pitiful noises at him, and asked if I could just turn the puzzle upside down and see what the answer was instead. So he did the research and gave me a few options and the reasoning behind them.

After settling on a car, I did go through Consumer Reports myself. Dealing with dealerships online was surprisingly painless. There are three Toyota dealerships in my area.

Based on this, Telnar formulated a sophisticated gameplan for pitting dealerships against each other to get the best price, which included "broaden your scope to other near-ish cities as necessary." While we were trying to get a price out of dealership #1, Adams Toyota emailed me:

"We'll sell you a Toyota Corolla LE for $500 less than what Consumer Reports says is fair, and slightly less than the average price for your area."

At that point, I just said, "That sounds good and they didn't make me dicker for it. Sold."

I called my local friend Corwyn and asked if he would come substitute for Lut in a test drive of the car: that is, sit in the passenger seat and make sure he fits. Corwyn is taller than Lut and of a similar build, although obviously Lut, with two compression fractures in his spine, has more flexibility issues. Still, he could give me an idea.

The Corolla is snug for Corwyn, but he does fit. I told Charly, the salesman, that I would take it. I picked out a black one, because they had several colors and if you could get black why wouldn't you get black?* I could've saved seventy-five dollars or so by getting a white one that came with cheaper floor mats**, but I decided I was willing to pay a slight premium for black, after all.

It's possible that if I'd been more dithery, or if I'd waited a month or two until they were more desperate to make room for 2018s (they had a lot of 2017 Toyota Corolla LEs in stock), I could've gotten a better price, but I am content.

I made the decision to purchase on July 27, and requested a 401(k) "loan" the same day. Name notwithstanding, this is not an actual loan. There is no approval or qualification process: I ask for it, I get it. In effect, it is me taking the money out of my 401(k) and formally promising to pay myself back (at 3% interest). It's not like a margin loan, where I'd pay interest to a third party while my money remained invested. I'm paying myself. If I failed to pay myself back, then I'd have to pay the government the early withdrawal penalty and taxes for the money I took out of the 401(k), but there's no collections process involved. It's all my own money.

The next day, the 401(k) people told me it would take 3-5 business days to fund it. I emailed this to Charly: "So I should be back between 8/1 and 8/4, depending on whether or not yesterday counts as the 1st business day."

At 9:30am on 8/2, Charly emailed me for a status update. I hadn't heard that the loan had been funded yet, but I work at my bank so I checked my account.

The funds had arrived 30 minutes prior. I went to the teller line to get a cashier's check (they would've taken a personal check, but I don't know where my checkbook is -- who writes check? -- and I work at a bank so cashier's checks are easy and free) and emailed Corwyn to get a ride. By 10:30, we were on our way to the dealership. Having made the decision, I was really impatient to finish the whole process.

Which still took like two hours, even though I was paying in cash. Buying a car is complicated.

I returned the rental that evening, with oddly mixed feelings. Yes, it is cool to finally have my own car, but I've been renting from the same office at Enterprise for eight years or so. They all know me. And up until now, when I need a car every day, it was a very cost-effective way of handling my transportation needs. I am kind of sad not to be doing it any more. Even now, I wonder if I should've gone with a short-term car lease, or some kind of arrangement where I'd have a car for several months, until Lut is stable and at home, and then go back to renting a car as needed.

But owning a car does save time, vs going to the rental place and picking one up, and returning it afterwards.

And the Corolla is beautiful and I love her. As soon as I purchased her, I stopped being practical about her and became immediately sentimental. I may end up as one of those people who washes their car every month. I'm sorry.

She is a much fancier car than I would have acquired, left to my own devices. She doesn't have any extras (beyond the pricer floor mats), but lots of things come standard on a Toyota Corolla LE. The standard things that made me pick this model of car are safety features, like pre-collision detection and automatic braking.

Some things that I thought were just safety features turn out to be nice features for general driving. For instance, its cruise control is coupled with a radar system that detects when a car is in front of you and slows down accordingly. This makes cruise control so much more useful. Even when the road is crowded, I can leave cruise control on and the car will automatically adjust the speed whenever someone pulls in front of me or I catch up to someone moving slower. I use cruise control for the nine-mile highway drive from my home to the hospital, which I've never bothered doing on any other model of car. It's nice.

It also has a USB port, so I can plug in my iPod for music without needing any intervening doodads, which is convenient. And I can charge devices off of it with just a USB cable.

Those are the main extra things that I routinely use. It has a bunch of other doodads, like it syncs with my phone to take phone calls. I am honestly not sure this is a great feature, since even hands-free phone calls are a distraction when driving. But Charly set it up so it's there for when the hospital calls while I'm driving. Until the bluetooth thing randomly fails, which is my usual experience with bluetooth.

Of course, I took pictures of her: 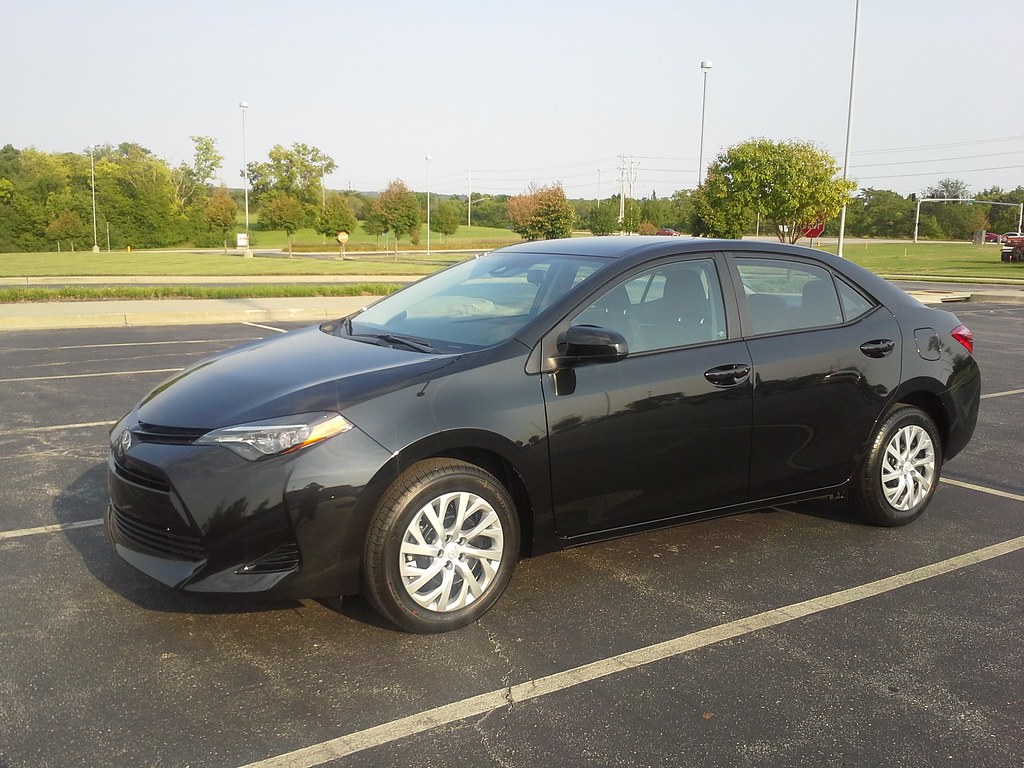 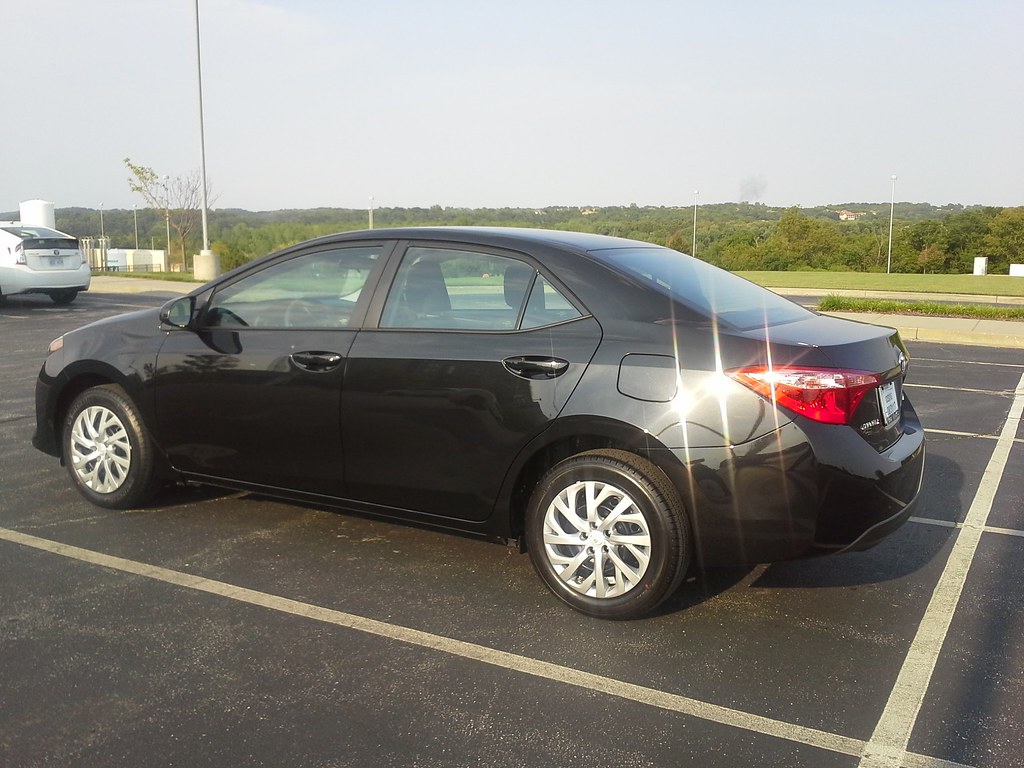 I want to get decorative magnetic decals for her, but it may be too much effort to find/make the kind of thing I want. I'd like a trim design similar to City of Heroes' "tribal" pattern, to curve along fenders and the bottoms of the doors. I haven't seen anything like what I want. A bunch of die-cut flowers, though. Maybe I will bling her out with those.

I haven't settled on her name yet (of course she is going to have a name). I am debating between Purr (after one of my black dragons in Flight Rising) and Ardent (after The Moon Etherium protagonist.) So I'll put in a poll for her name!

* I may have been ruined for other car colors at a young age by K.I.T.T.
** I don't know why car floor mats are expensive, but they are.

This entry was originally posted at http://rowyn.dreamwidth.org/613297.html. Please comment there using OpenID.
Collapse