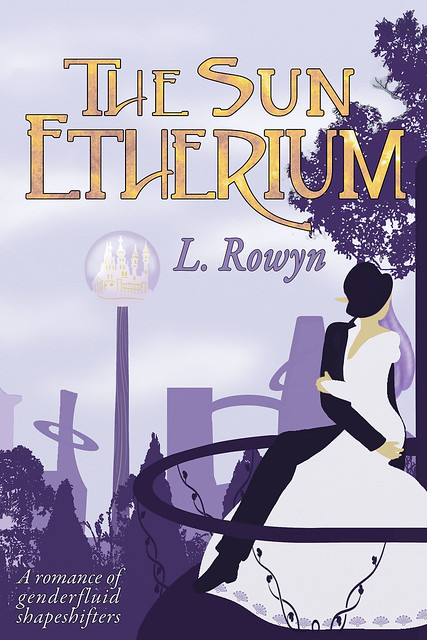 The Sun Etherium
Ebook | Print
A romance of genderfluid shapeshifters, set in a post-scarcity world of magic and intrigue.

Fey immortal Jinokimijin never expected ruling the Sun Etherium to be all fun and games -- but as it turns out, organizing fun and games is his first challenge. Firing the chair of the Founder's Festival for praising slavery is easy: ensuring the Founder's Festival succeeds afterwards is considerably harder. Jino needs a distraction from the temptation to micromanage. Luckily there's an anonymous club just waiting for a new member eager to set his trials briefly aside....

Jino's not the only one trying to escape his troubles: Kireki, once prince-consort, lost his position along with the abusive wife Jino deposed. Can the relationship spawned by two masked fey survive the revelation of their true selves? And will the Founder's Festival be the first of Jino's successes as ruler of the Sun Etherium... or the towering failure that undermines his throne?

Note: this book follows after the events of The Moon Etherium, but both works stand alone as complete novels and can be read independently of each other.

The Sun Etherium is near and dear to my heart for a variety of reasons. I love writing about a post-scarcity society that is casually accepting of so many things my own society struggles with. It was super-fun to write genderfluid characters who can shapeshift to make their bodies match their idea of themselves at any given time. Although Jino isn't much like me as a person, their feelings about gender match my own more closely than any other character I've written about.

This book is about nonviolent conflicts, and characters who don't have the option of using force to resolve their problems. While there's some use of force in flashbacks, the present day problems are caused and resolved through intellect or by social means. In my own life, violence has never been the answer and yet I still have plenty of thorny problems. So I enjoyed portraying different kinds of issues.

Other Stuff:
M.C.A Hogarth also launched a new book this month, From Ruins, the final installment of her Princes' Game series. The series is a magnificent space opera, starting with the intimate details of the relationships between a few key players, and then showing the sweeping consequences of those early changes. If you like binge-reading a whole series at once, here's your chance! The first book, Even the Wingless, is still on sale for 99 cents as of this writing, so grab it now!
This entry was originally posted at https://rowyn.dreamwidth.org/622067.html. Please comment there using OpenID.
Collapse