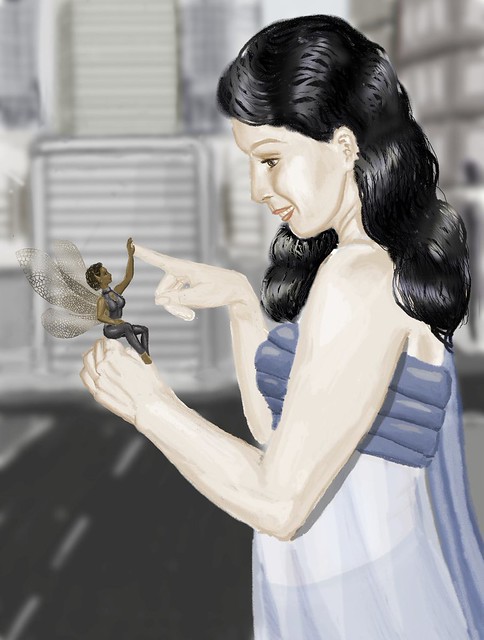 I pronounced this drawing done a few days ago. This is the first time I've done a black and white digital picture and then converted the b&w to color. (There is a specific tool that basically changed the color without changing the values. So you select the areas/layers that have the same color -- "these are all brown skin" -- and just change them, and it keeps all the shading.) I am not perfectly happy with the process. I think I am supposed to do some touch-up work to make it look better. This probably requires looking at tutorials or something. I find tutorials on digital art a bit grating because they're all designed around Photopaint and while I have two art programs and they can do most of the things Photopaint can, they do not do them in the same way so spending five minutes watching someone dig through submenus on Photopaint is not as helpful as I'd like.

For this particular picture, however, I'm calling it here. I didn't have a purpose in mind for it anyway. It's just "I saw this pose on a Senshistock (a stock/pose reference account) and went OMIGOSH SO CUTE I WANT TO DRAW THIS."

Now I've spent 15 hours drawing it and I feel like I should come up with personalities for the characters and write a story for them. I mean, I already have a cover, that's the hard part, right?

It kind of is, actually.

I don't think I like this picture enough to make it a book cover though. Even if there is plenty of room at the bottom to lay out the title and author name.

I am a little tempted to go back to one of my early pictures of Miro and Ardent and try coloring it in this fashion, though. Except the layout on my favorite wouldn't make a particularly good book cover. I feel like, while my rendering skills are weak, my framing skills are [File Not Found]. I can't figure out how to frame things in a dynamic, effective way. Art. So hard.

This entry was originally posted at https://rowyn.dreamwidth.org/634384.html. Please comment there using OpenID.

Shout-out to Microsoft Office's Excel, the Swiss army knife of computer applications, the Spreadsheet Program That Could.

Was this a good idea? MAYBE NOT BUT LET'S DO IT ANYWAY.

On my first exposure to spreadsheet programs, I found them confusing: "I don't understand how this works." One of my friends, Telnar, said "You know how word processors are programs for using text? Spreadsheets are word processors, but for numbers." And I thought, "Oh, that makes sense."

And Excel thought, "Cool, but WHY STOP THERE."

At some point in the 90s, Microsoft decided to watch how users actually used the various programs in the Office suite. "What kind of numbers do our users crunch in Excel?" they asked. "What sort of functions do they need?"

And the users said "Well, we don't really use this for numbers that much."

MS Excel developers: "That sure is a thing. So. HOW CAN WE MAKE THIS PROGRAM BETTER FOR LISTS."

Users: "Really we want to store a lot of records, like lists of our customer's names and addresses in a format that we can sort and filter and stuff."

MS Excel: "That thing you just described. Did you know Access comes bundled with MS Office, just like Excel?"

Users: "No. Also, databases sound scary and we like you, Excel."

Users: "WE LOVE IT THANK YOU."

MS Excel: "WE DON'T KNOW please stop being scary so we can stop doing your job. Also, we're going to add pivot tables to give better reports on the database information that users keep putting in spreadsheets."

MS Excel: "It gives you statistics on the data in a database. Like the total number of customers who live in Michigan and joined in 2017."

Most Users: "That sounds scary I don't think I can do that."

Users: "Howabout you add charts? Like pie charts, maybe, or bar graphs, or line ones perhaps?"

MS Excel: "OH YEAH LET'S JUST DO ALL OF THOSE AND ALSO TWELVE MORE KINDS IN INCREASING ORDER OF OBSCURITY."

Some users: "I'd like to be able look stuff up. Like I want a formula that checks to see if Mary Watson is in my address spreadsheet and then tells me what her address is."

MS Access: "You know what is great at this? A DATABASE PROGRAM."

Some users *sidle around Access, look hopefully at Excel*

MS Excel: "We're gonna call this formula "VLOOKUP", or "HLOOKUP" if your data is stored horizontally."

Some users: "You're the best, Excel!"

John: "Oh, hey, I'd love it if I could tell Excel to do the same set of operations on a spreadsheet over and over again. Like I get this spreadsheet from my distributor every month but the columns are in the wrong order and it has a bunch of records on international sales that I don't care about, and other stuff. Anyway I do this same fifteen-step process on every file and it'd be great if I could just press a button and have Excel do all fifteen steps."

MS Access: "HAVE YOU CONSIDERED USING A DATABASE PROGRAM FOR YOUR DATABASE NEEDS."

John: *hides in terror until MS Access is gone, sneaks over to Excel, whispers* "so can you help me?"

MS Excel: "We can add that! Here, press this 'record macro' button and then do your fifteen steps, then press 'stop'. Now you can replay that macro the next time you need to do those same things on a file."

Most users: "can we pretend it doesn't exist, it's scary?"

MS Excel: "Sure, our program works fine even if you ignore 99% of our features."

Pat: "So this macro thing is great but sometimes I want to be able to tell Excel to do things automatically that are more complicated than what I can record. Like I want it to dynamically change the range of cells that it's operating on, or whatever."

MS Excel: "So, huh. You want to be able to program Excel, basically?"

MS Excel: "Okay, well, we have this programming language that records the macros, so we can just expand it and users can write programs in it."

MS Excel developers: "Are we really putting an entire programming language in our spreadsheet program?"

MS Office: "Actually, we're gonna put it in all our products."

Most Users: "TOTALLY PRETENDING THIS DOESN'T EXIST WHAT IS IT EVEN IF WE WANTED TO BE PROGRAMMERS WE WOULDN'T NEED YOUR APP."

Robin: "Hey, Excel, can you make it so I can import stuff directly from my SQL database to a spreadsheet?"

MS Excel: "I DON'T KNOW MAYBE IF YOU TOOK OFF THAT ZOMBIE MAKEUP AND THE VAMPIRE FANGS PEOPLE WOULD LIKE YOU ACCESS"

MS Excel: "You're sure you don't want to use a SQL query builder or report writer for this instead?"

MS Excel: "... okay, we basically do anything a user has ever asked us for, so here you go."

Confession: in my 25+ years of using Excel, I have used every one of these features. I am pretty sure this means there is a WHOLE BUNCH MORE STUFF THAT EXCEL CAN DO. Does it julienne fries? PROBABLY.

Is it a good idea to build a form in Excel that uses VBA to hide and reveal parts of the form based on data entered and then send that form's data to a different spreadsheet which stores it like a database? Possibly you should have hired an actual programmer for your programming needs but EXCEL IS NONETHELESS HERE FOR YOU.

Like any Swiss army knife, Excel is not necessarily the BEST tool for any particular job, and sometimes using it for a given job turns out to be a TERRIBLE MISTAKE. But I love you anyway, Excel. You're the best. ❤️

This entry was originally posted at https://rowyn.dreamwidth.org/634850.html. Please comment there using OpenID.
Collapse