Health/Fitness
Pokemon Go had an event in June where they gave out a bunch of bonus rare candy if you walked 50km in one week. So I walked 50km in one week. That's a little under 30 miles. It was enough extra walking that my average activity for the month was 72 minutes, up from an average of 57 minutes in May. Even though I went to visit Terry at the end of the month and did not make a point of exercising daily during the trip. (Although, in fairness, Terry and I did go for a walk on most of the days of my visit.)

I have also lost 10 lbs since the beginning of the year, so that's nice.

Writing
Spark of Desire was up to 43,000 words as of month-end. I've been thinking about switching projects, since the reason to write Spark was "I am motivated so it will go quickly", but it's not going particularly quickly. I poked at the outline for Raindrop's novel a little more, but Spark remains the path of least resistance. I mean, there's still a lot of resistance and it's hard to even get started writing most days, much less to make appreciable progress. But everything else is even more resistance.

The Business of Writing
Poked at Eclipse's novelette again, but no real progress.

Art/Other
Oh hey I actually did stuff in this category. All fan art for quests on Sufficient Velocity, and mostly simple portraits This one is my favorite: 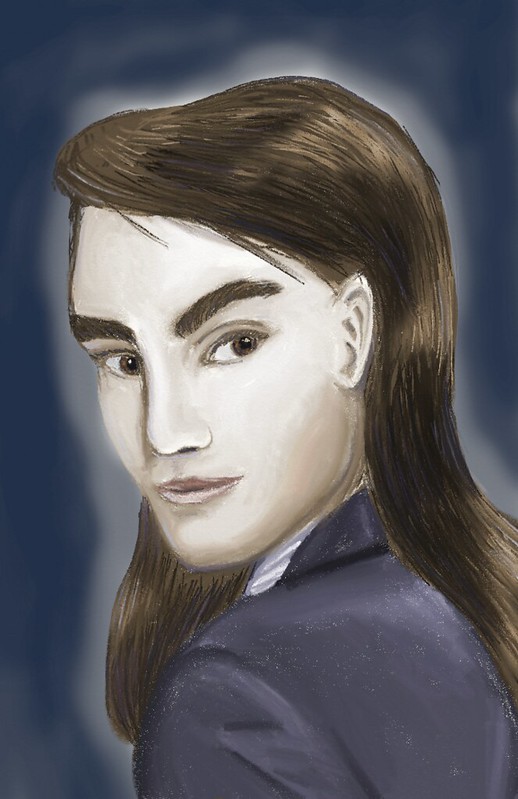 You can click on it and browse forward to see the other four pieces I did in June. (And a sixth one finished in July).

Portraits are pretty fun to draw.

Happiness
I got to see Terry finally! ❤️ That was good.

Goals for coming month
Keep up with general adulting & helping Lut
Do the book launch for The Princess, Her Dragon, and Their Prince
Be less depressed than in June

There's other stuff I hope to do -- the usual editing and writing -- but I failed my creative goals for June and I don't feel like setting ones to fail in July. So I'll just keep it easy. I've already done some writing in July, so that means I'm already ahead! \o/ This entry was originally posted at https://rowyn.dreamwidth.org/640700.html. Please comment there using OpenID.
Collapse