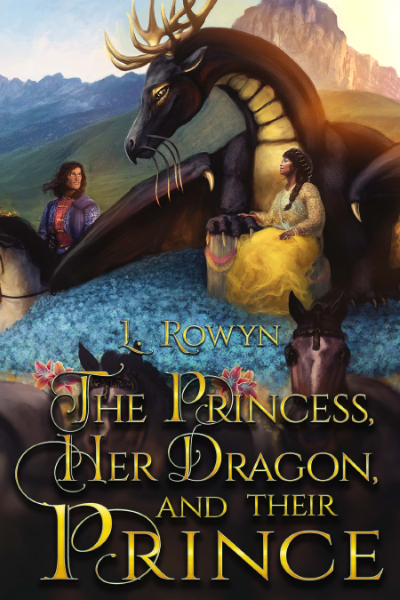 The Princess, Her Dragon, and Their Prince
Print and e-Book
A standalone polyamorous fantasy romance.

After Mereni is conquered by a vicious dragon, Mereni's king-in-exile is willing to do anything to save his kingdom. Including promising half of it and the hand of his daughter, Princess Cherish, to whomsoever stops the cruel beast. With luck, he reasons, one or more of the neighboring kingdoms will come to their aid, and some eligible prince will claim his daughter as bride. Perhaps even some palatable individual, like the handsome Prince Eclipse, who is already on friendly terms with Cherish.

-- Or that the best individual to stop a dragon is, of course, another dragon.

Author Comments
Yes, after talking about this book for over a year, it's finally really completely done! And available for purchase! *\o/*

In February 2017, one of my Twitter friends, @muppetK, tagged me into a thread with @MicroSFF to suggest that I write a book expanding on one of Micro SF/F's tweetfics: I demurred on the grounds that I would not want to rip off another author's ideas. Micro SF/F replied to the the thread to offer blanket permission to use their microfics as inspiration. (You can scroll up from this link to read the original conversation.)

And that was how The Princess, Her Dragon, and Their Prince was born. I added the prince's role because I've not written a polyamorous story since Further Arrangements in 2015, and I wanted to. When I started working on the outline, I wrote in a part where one of the characters goes to faerie-like people for assistance. Then I remembered that I'd already written about a faerie-like race in the Etherium books, which is how this novel came to be set in the Etherium multiverse. You need not have read any of the Etherium novels to enjoy Princess, however, and because it takes place in a mortal world, most of the setting is new.

Content Notes/Spoilers
Unlike the Etherium books, The Princess, Her Dragon, and Their Prince takes place in nations that are hostile to transgender people (this is mitigated as the events of the book unfold). There is some misgendering of a trans character in the early part of the book.

This entry was originally posted at https://rowyn.dreamwidth.org/640862.html. Please comment there using OpenID.
Collapse