Health/Fitness I didn't walk 50km in a week in July, so not quite as much exercise this month as June, but more than May or April: 65 minutes per day.

The last couple of weeks, I've made an effort to walk faster while I'm out walking. I don't have a good way of measuring this, although it looks like my steps-per-minute-of-walking is going up. This is not a great measure because my "minutes" only includes the time I spend walking for a few minutes or more, and "steps" includes any time I walk around with my phone. The data for "how far I walked but only when I was going for a walk" exists but not in a convenient form for summarizing.

Still down around 10 pounds for the year. Eating habits have not changed much; still tracking and taking some care not to overeat.

Writing
I wrote a thing! "Insecurity", an 8000-word story for The Reclamation Project, a shared-world furry anthology that John "the Gneech" Robey is editing for FurPlanet.

Back in the 80s, I started reading the first shared-world anthology, Thieves' World, with its first book. Shared-world anthologies were pretty popular for a while and I read a bunch of them; I remember Liavek with particular fondness, and Wild Cards, which George R. R. Martin wrote stories in and edited for decades (still going!), long before he hit the mainstream with Game of Thrones. I always thought this style of story-telling was great fun and I am excited to have written a story for one. Eeee! *^_^* FurPlanet plans to release the anthology at the end of this year, and I will keep y'all posted.

The Business of Writing
I published The Princess, Her Dragon, and Their Prince! It was a successful launch! Woo!

It was, in fact, my most successful launch since A Rational Arrangement, surpassing the launch month for Further Arrangements by a few dozen sales. I am still a long way from publishing another book as successful as ARA was, granted, but I am pleased. Ooh, and in other good news: the new release had a perceptible "halo" effect on the rest of my catalog: every other title also sold a few more copies in July than in June. The effect really was spread across the whole catalog, too. ARA was the biggest beneficiary, but readers who wanted to try something else after reading Princess just went all over the place.

I also revised "Insecurity" and sent it off to the Gneech.

Oh! And I solidified the outline for The Lord, His Monster, and Their Lady. It stars Raindrop, one of the supporting cast members from The Princess, Her Dragon, and Their Prince. It is ridiculous and inspired by Northanger Abbey in the sense of "gentle send-up of Gothic romances". Raindrop is the antithesis of a Gothic romance heroine. It amuses me greatly. I think y'all will love it.

Art/Other
I drew a fan art portrait at the start of July: 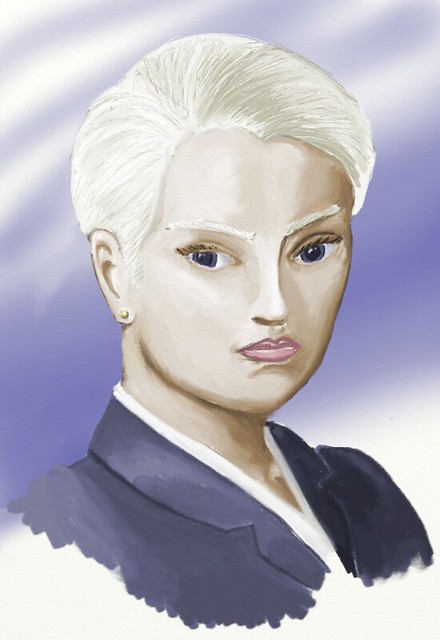 I started another portrait but wasn't happy with how it was coming out and just stopped drawing for the rest of the month.

Pokemon Go added a new mechanic: Team Rocket "takes over" pokestops on occasion for 30 minutes at a time. While they're there, you can battle their three-Pokemon teams of "shadow Pokemon". If you win the battle, you have the opportunity to capture a shadow Pokemon, which you can then purify.

It took me a while to figure out how to defeat Team Rocket. In raids, you really want a team of pokemon that the raid boss is vulnerable to. With Team Rocket, raw CP seems to be the most important factor. I buffed up a team of three Slakoth to 4250-4400 CP, figured out how to get their charged attacks up to "Excellent" reliably, and they can now take out pretty much any Team Rocket combo they've gone up against.

It's not clear if there's much real advantage to purified Pokemon over regular ones. They can get a charged attack that's only available to purified Pokemon, and they're cheaper to evolve and level than standard ones. But none of that necessarily makes them any better in combat, and most of the shadow Pokemon are pretty wimpy in their regular forms. But hunting for Team Rocket pokestops has made playing Pokemon Go actually interesting to me again, at least for a little while. I went to the Plaza on Wednesday evening for an EX Raid, and wandered around for an extra hour getting some exercise in and taking out Team Rocket. I figure on doing the Team Rocket hunt again either tomorrow or Sunday. Saturday is Community Day, so I expect I'll do that on Saturday rather than fighting Team Rocket.

Happiness
I did manage to be happier in July than in June. So that was good.

* Help Lut and generally adult
* Just edit "A Mortal Prince" already. I have been waffling about what to do with this novelette for several months. I am going to stop waffling and Do a Thing.
* Send "A Mortal Prince" to first readers. Then if I did the wrong thing, they can tell me. My plan for "A Mortal Prince" is to make it a freebie anyway. It is really a tie-in story: it fills in the background for Eclipse, the titular prince in The Princess, Her Dragon, and Their Prince.
* Do some fiction writing too
* Do not angst about productivity otherwise.

This entry was originally posted at https://rowyn.dreamwidth.org/641373.html. Please comment there using OpenID.
Collapse