I didn’t make it to exercising 20 times in March: 17. Even so, total effort over the course of the month was pretty similar. Not particularly making progress on improving overall fitness, but I’m not losing ground, either, so that’s good.

Back in January, Lut and I signed up for the county and city vaccine wait lists. In early March, Lut finally got an email telling him he could make an appointment, which he did within minutes of it being sent, at like 4AM because he happened to be up then. He got the first dose of the Moderna vaccine on March 10, and is scheduled for the second on April 7.

On the 31st, my state made my category (bankers) eligible to receive the COVID-19 vaccine. I promptly went to our usual hospital’s COVID-19 vaccine sign-up site, which directed me to sign up for the state’s vaccine wait list, which I dutifully did. On the same day, the local library system sent out an email with a “COVID-19 Vaccine FAQ” link. I was not optimistic that they’d have any new sources for me to try, but I checked it out. They noted that Wal-Mart and CVS were offering shots. I’d had no luck with either when I tried them at the beginning of March, but it had been a few weeks. Wal-Mart hadn’t updated their eligibility criteria yet and the last time I tried their site, it didn’t tell you whether any given store was actually offering shots: it was just “click on store, see that they have no available appointments, click on another store, same, repeat for half-dozen stores before concluding that maybe they’re not offering shots in this state yet at all.”

CVS’s site, however, showed me a store that had appointment slots available early in the form-completion process. There was a lot of form to complete, but I got through it and made an appointment for the next day.

As of 4/1, I have received one dose of the Pfizer vaccine. Aw yisss. CVS was lovely about the whole thing, had plenty of staff on hand to make sure it went smoothly, and it was much less crowded than the process at the pop-up clinic where Lut got his shot. (This is just a matter of scale -- the pop-up had like 10 stations to administer vaccines vs CVS’s one booth; both processed patients quickly and administered vaccines within like 10 minutes of arrival.) Lut had no side effects beyond a little arm-soreness and maybe some extra fatigue. My arm is slightly sore but it’s only been a few hours. I had insomnia last night so I’m not gonna be able to tell if it makes me tired.

I dug out the incomplete outline for You Thought You Wanted to Be Level 99, But Really You Wanted to Be a Better Person, finished it up, made some additional notes about the MMO and characters involved, and started writing it. Draft is up to 19,600 words.

I poked at the cover art for The Lord, His Monster, and Their Lady, did the layout for it, and sent that to Alinsa. At this point, the book is just waiting on the print layout.

I also read through Demon’s Alliance and Angel’s Grace, and made editing lists for both of them.

Still chewing through India After Gandhi at the same glacial pace. I did not get brave enough to try reading more fiction, although I’ve thought about it a few times.

Once I had a complete outline for a book I wanted to write, I dumped art in favor of writing. Before that happened, I did finish a picture I’d started of Frost and Thistle back in 2019. And I did some sketches of ears for Ear Week. I like how this one came out. 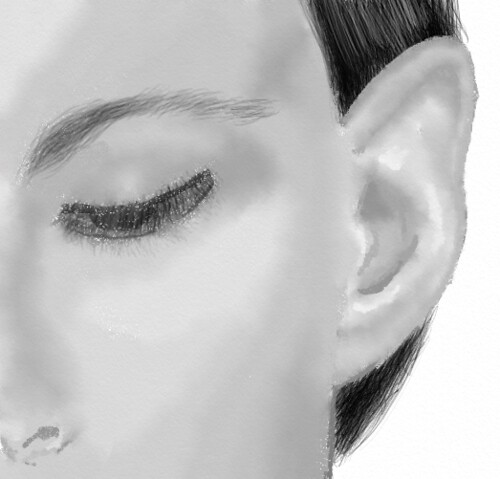 Instead of blowing my “learn a new game each month” goal forever, I learned Draftosaurus. It’s simple and not really a “play every week” sort of game, but still fun.

March was much better than April -- having an outline to write from makes a huge difference in my mood.

April is CampNano, and while I’m not gonna use the CampNano site, my beloved writing incentive game 4thewords always does special events for CampNano. So I’m gonna participate in that (just as soon as I finish One Last Quest).

But I’m still not feeling ambitious enough to commit to a writing target. So goals are still minimal:

This entry was originally posted at https://rowyn.dreamwidth.org/2021/04/02/marchinreview2021.html. Please comment there using OpenID.
Collapse