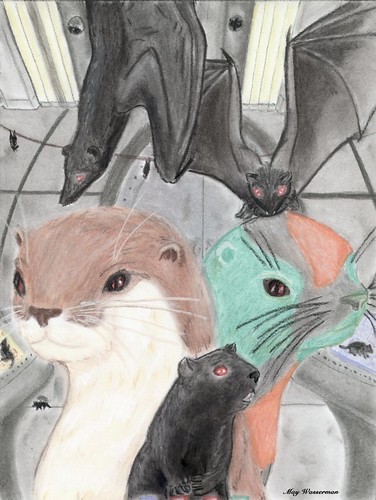 terrycloth switched viewpoint characters on his story, "Familiar". So I had to do a picture of the new POV character. (OK, I didn't have to. I wanted to, though.) This is Five Black Griffons. Yes, all of the figures are one character. Five Black Griffons is a gestalt: a single person made up by combining (in this case) five individuals. Gestalts can control multiple bodies; Five Black Griffons controls the bodies of the two space otters who joined them, plus a multitude of black bats and rats. I drew both otters and threw in two bats and one rat in the foreground to represent the five total components, but there are a lot more rats and bats that belong to the gestalt, which is why there are more of those in the background.

And an icon-sized version, if Terrycloth decides not to stick with the one he made for himself: