The thing that you do 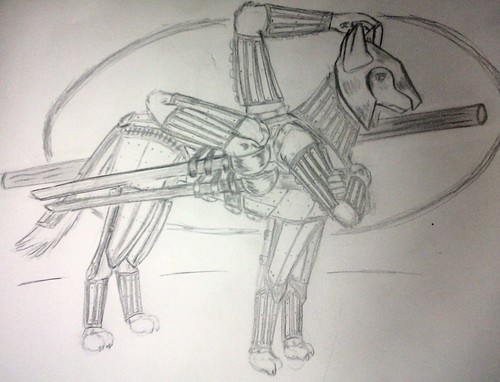 I didn't really feel like doing anything useful today, but my new expanded "do something useful" goal meant that I really ought to. After poking at all the things I didn't feel like doing, I concluded that I did want to draw something. Specifically, I wanted to draw one of the Blee from World Tree. Blee are described, approximately, as dogs with an extra four arms. The four arms are supposed to have four joints, a fact I did not check until I'd half-finished the sketch. Oops. Maybe they just have extra joints at the shoulder and elbow, to allow the arms to rotate at useful angles.

I spent about two hours on the sketch, mostly because I wanted to draw the armor. It's supposed to be bone plates and splints attached to leather. Except the helmet, which is probably carved meng. This illustrates Vreetle the Deadly, a minor NPC from my online World Tree game who made a brief appearance last session. The PCs have spent the last four or five sessions in a town populated mostly by Blee, so I wanted to draw one in the hopes that I will finally stop visualizing them as humanoid half the time. I still kinda want draw another Blee wearing ordinary clothes, so that I can also stop visualizing them as naked the other half of the time.