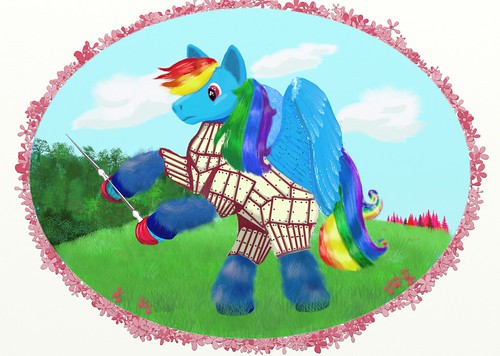 I gave in and bought a copy of ArtRage 3 Pro this weekend, even though I couldn't find my code for ArtRage 2 to get the discount. Yes, in theory, I could probably find a way to make my copy of Corel PhotoPaint 8 work under Win7. On the other hand, PhotoPaint 8 is sixteen years old. I feel like it's maybe time to see what using a modern paint program is like.

ArtRage 3 Pro is pretty awesome, as it turns out. EASIEST BACKGROUND EVER. I didn't actually draw the background, just sprayed it on with stickers. I will hopefully not cheat on backgrounds this way with every picture I do in ArtRage. Although it will be tempting. Very tempting. It's like floodfill for the modern age. You can click through to Flickr for larger versions ... the full-size version is very large indeed.

koogrr's new PC for the monsters World Tree game, which has two PCs now. Maybe I'll actually get to play it sometime.

terrycloth had just been watching too much of the new My Little Ponies(tm) show. Thus: My Little Etsevvi. I really wanted to draw her. According to my log, I spent six hours and twenty minutes on the picture, which I started on Saturday. For some reason, it's easy to spend hours at a stretch working on a picture, and nearly impossible to motivate myself to devote the same time to writing. Even though I don't like my artwork and I like my writing, as a general rule. I am not sure what's up with that. Possibly I am just sick of writing while it's been long enough since I did much drawing that it's still shiny. Anyway, at this rate I am not going to get much more writing done in February than I did in January.