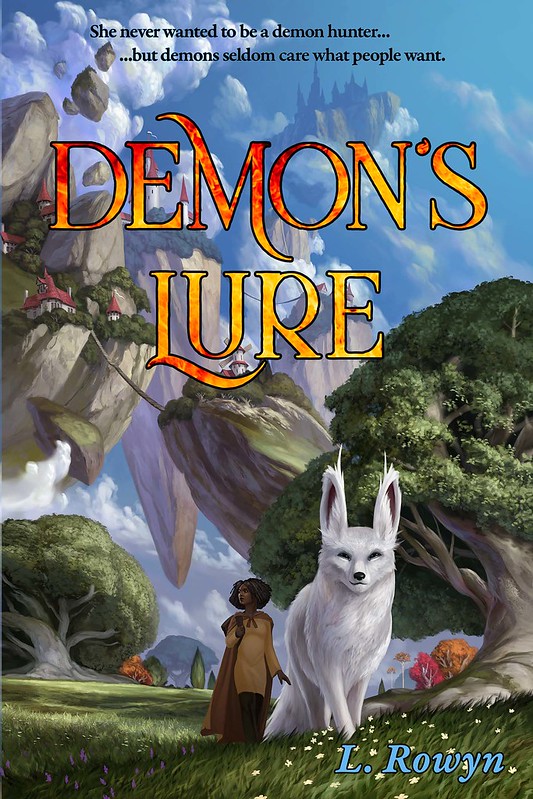 Ebook ~ Print book
In the fight against the demons of the skylands, Sunrise has one of the rarest powers: that of a lure. Where demons normally feed by tormenting their victims, Sunrise draws them with her happiness.
She doesn't want to hunt demons, but when a hunter team arrives at her village to ask for her help, she agrees. It should be easy: they just need her as bait for a pain demon that is too fast for them to capture otherwise. And a typical pain demon is no match for an experienced team of demon hunters.
But this is no typical demon. And it has its own plans. It has no intention of being trapped, and is not worried about the hunter team. No, its main concern is: what does a demon who's spent millennia torturing and tormenting humans know about making one happy?
~
Demon's Lure is my newest release! It's in a brand new setting, the skylands of the Anesh archipelago. This is my first general fantasy: there is no romance in Demon's Lure or in its sequel, Angel's Sigil*. So those of you who like my world-building and watching characters problem-solve, but aren't so much into the romance: this one's for you! Its theme is change and adaptation, with central questions like "how can you be happy despite things you don't like and can't change?" and "what causes people to change?" and "do the same things apply to demons?"
Some of these questions are less universal than others, is what I'm saying.
Anesh is a queer-positive setting; the protagonist is bisexual, some minor characters are nonbinary, and the society as a whole considers this unremarkable.
My cover artist for The Demon's Series is the talented Anthony Avon, and I can't wait to show you the cover** for Angel's Sigil, the sequel. That book will be out in August, so you won't have to wait long for the sequel.
* If I write a third book in the setting, it will almost certainly have a romantic subplot, though. Just warning you.
** Though if you browse around on Avon's DA, you can spot it now. n_n This entry was originally posted at https://rowyn.dreamwidth.org/629530.html. Please comment there using OpenID.
Tags: book release, demon's lure
Subscribe