Pretty much the same as last month. Exercised 20 times, technically, by way of counting things like “shoveling an inch of snow,” “doing laundry,” and “10 minutes of a beginner core workout” as exercise.

I remembered that I had an “alien peacelord” romance novel idea a while back, so I started developing that further. I have 7500 words of notes. It is not particularly going anywhere.

I finished the final read-through on The Lord, His Monster, and Their Lady, and sent the last corrections to Alinsa.

Still chewing through India After Gandhi at a glacial pace. I did finish two Alexis Hall novels, which was surprising but nice.

One of the oddities of my life is that most of my friends assume I am a big reader, notwithstanding the fact that I have not been a big reader in over 30 years. I read voraciously as a child and a teenager, but that dropped off sharply after I got to college. I have had occasional bursts of reading since then, but I have not finished as much as ten books in the last two years. At this stage, I am not just “not a big reader”: I am not a reader at all.

I set a goal of finishing 12 books this year, which will more than double my current rate. We’ll see if it happens.

I have opened the Kindle app and read at least a few pages of something every day this year, so that’s kind of cool.

Actually did some of this. Mostly from following along with “The Joy of Painting” videos, but also did a bunch of sketches for the theme weeks started by a Discord server I frequent. Themes so far have been hands, backgrounds (I just did more Joy of Painting videos), and eyes. The first eye I did was largely a paintover of the reference pic, but I still like it enough that I’m gonna drop it in here. It’s of Frost, from Frost and Desire. 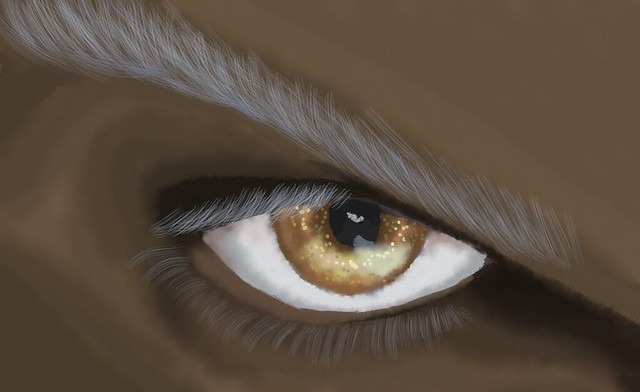 I realized on Thursday that I was gonna fail my “learn a new game each month” goal if I didn’t learn one that day. And then I realized I wasn’t accomplishing any of my other goals, so I blew that one off too.

I spent most of February depressed, and I am still depressed now, so I will stick with the “modest goals” thing.

Yes, that’s everything on the goal list. I don’t have any more low-hanging fruit that I’m comfortable listing as an actual “I will get this done” goal.

I decided to break down the ones that amount to “edit the two drafts you’ve got lying around” into smaller pieces in the hopes that I would be more tempted to do them because then I could cross them off.