New Release! The Lord, His Monster, and Their Lady 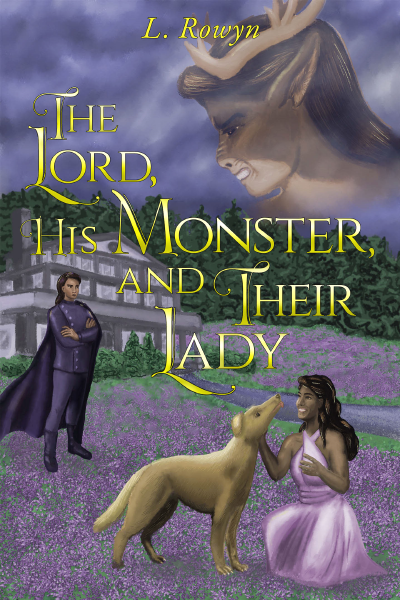 After his first romance ended in bitterness and anger, and his disastrous first marriage ended in the death of his wife, Lord Jaguar of Honor has no interest in a third attempt at love. But he is the sole surviving member of his House. It is his duty to wed, and he is not a man to shirk from an obligation, no matter how unpleasant.

The daughter of a disgraced traitor, saved from ruin only by the grace of their highnesses, Lady Raindrop of Endurance has no romantic expectations of marriage. Her qualifications for a husband: suitable age and wealth, of a House that will make a good ally for Endurance.

*"You know, I am far more than fortunate! I am the sister of a Great Lord who loves me, my House is sound, I am sought after by an attractive, wealthy lord who is not much older than I am, and -- let us not forget -- I have Cantara's Very Best Puppy!” Raindrop said. “Do you have any idea how good all of this looks to my twelve-year-old self who was engaged to a man forty years her senior and watching her world tilt towards treachery and rebellion?"*

But a monster hunts in the forests of Honor, and rumors swirl around the death of the Brooding Lord’s first wife. Did Lord Jaguar murder his own wife for her failure to provide him with the requisite heir? Or did his former lover kill her, in a jealous rage?

“Is there any evidence of this?” Raindrop asked. “These are the lowest quality rumors. It’s as if they put no thought into them at all.”

Or was there some other sinister force at work --

After I finished writing The Princess, Her Dragon, and Their Prince, I knew that I wanted to write another standalone romance in the setting. And I knew that I wanted Lady Raindrop — the vivacious, irrepressible younger sister to Lord Lightning, whose household Eclipse and Dyaneli rescue — to be one of the protagonists.

But it wasn’t until I corresponded with a friend about Jane Austen’s Northanger Abbey that I knew the kind of story I wanted to tell.

The basic gothic romance plot involves a brooding, possibly sinister lord, a creepy house, a terrible secret, and a scared, timid young woman jumping at shadows as she struggles to survive.

And I thought: what would Raindrop — bold, fearless, relentless, and pragmatic — do if she were in a gothic romance?

And that was how The Lord, His Monster, and Their Lady was born: a queer polyamorous romance featuring two brooding men with dark pasts and too many secrets, and a young woman neither impressed nor intimidated by any of it. That was the cover concept, too:

o/~One of these things is not like the others o/~

I had so much fun creating this book; I hope you’ll enjoy reading it.

This entry was originally posted at https://rowyn.dreamwidth.org/2021/06/02/lordmonsterlady.html. Please comment there using OpenID.
Tags: book release, the lord his monster and their lady
Subscribe