“How many other characters do you have?” Frost asked, as I worked on a picture.

“I don’t know. I can’t even remember how many books I’ve written on the average day,” I told him.

“No, seriously. What if we just count the point-of-view characters?”

“Nikola, Wisteria, Justin. Anthser, Southing. Mirohirokon, Ardent Sojourner. Jinokimijin, Kimikireki. Zenobia -- ” Frost ticked them off on his fingers, then ran out of fingers and summoned a floating ledger to count them on instead. “Kildare, Madden. Sunrise, Bright, Raven, Mercy.”

“Look, is there a point to this exercise?” I asked him, as he conjured up my webpage to look at the list of books.

“Myself, Thistle. Spark, Komyau. Cherish, Dyaneli, Eclipse. Raindrop, Jaguar, Worth. I daresay I’ve missed some of the minor PoV characters -- ah, wait, you’ve some unpublished books, too. Let’s see, Kalisha, Rachel, Griffin. Swan, Breeze.” He flicked his fingers to total the calculation. “So thirty-one. Including myself. How many of them have you drawn?”

“And the little interior sketches for Scales and Coils --”

I glanced over the list of publications. “Twenty-five,” I pronounced, with a note of triumph. “See, I draw most of my characters.”

“Splendid. And whom have you drawn more than three times?”

“Um. Thistle. Ardent and Miro. Uh. Kildare and Madden, I think. You.”

“Yes! Twice in pictures with you, and then two portraits.”

“Thank you.” I returned my attention to my tablet.

“But there must be an upper bound. You’ve not drawn me a hundred times. Yet. Have you?”

“No! Like ... twelve,” I said. He gave me a skeptical look. “Maybe twenty if you count all the sketches and the non-canon drawings when I was trying to decide what you look like. Or twenty-five. Not more than thirty, I’m sure.”

“Look, it’s not my fault you’re the prettiest of my characters.”

“Setting aside that you created me and my appearance is quite literally your fault, I am far from the prettiest of your characters. Moreover --” Frost gestured pointedly at my tablet “-- I am indisputably not the one with the most prominent bust.”

“Just because it’s a boob meme doesn’t mean you have to use a character with big boobs for it,” I protested. Frost eyed me. “It’s not! Most of my friends and acquaintances who did it used small-chested or male characters.”

Frost sighed. “I do not understand your fascination with drawing me. Could you not draw someone else? Do you not tire of drawing the same person over and over again?”

“I haven’t drawn you enough times to be bored yet. Don’t look at me like that! Comic artists draw the same characters thousands of times. I drew myself like ten times just doing that silly two-page tribute comic for The Three Jaguars.” I pulled it up and counted. “Eighteen times! In two pages! Twenty or thirty times is nothing. Also, Lut was in the hospital and I wanted to do something self-indulgent and fun.”

“You’ve succeeded at the self-indulgent part, I will grant.” He eyed my drawing with another sigh. “I suppose it serves as a good excuse.”

“Look, send someone by to cure Lut’s cancer and I promise, I’ll draw Thistle like a thousand times for you,” I offered.

I really did spend too much time on this goofy meme, though. 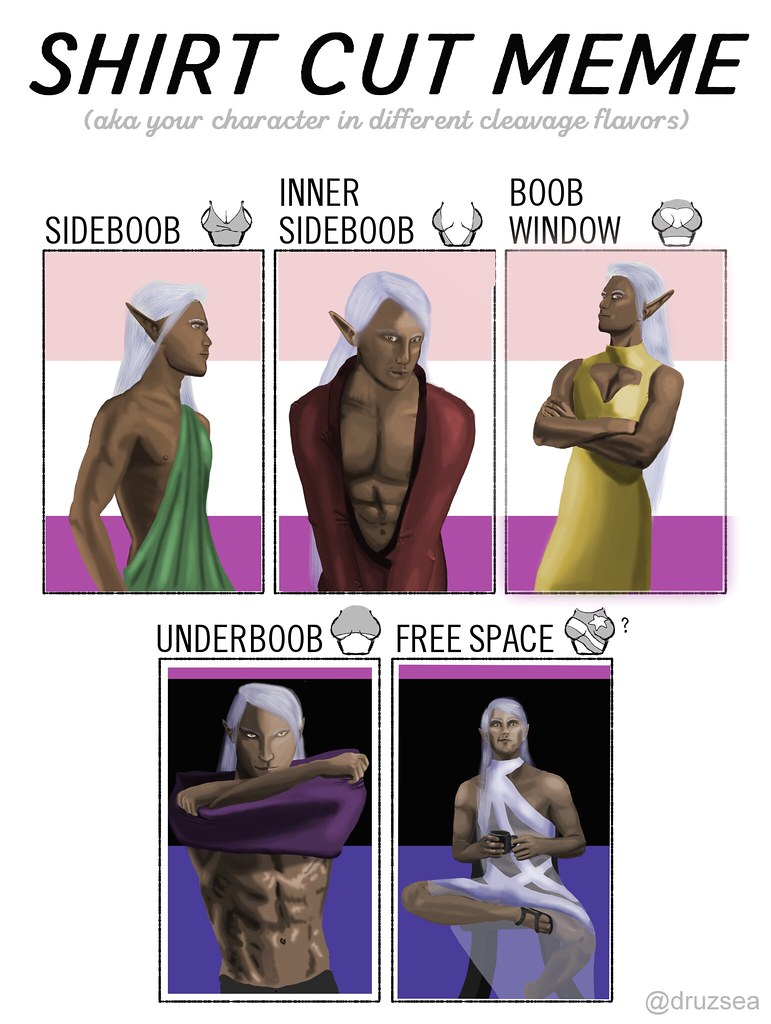